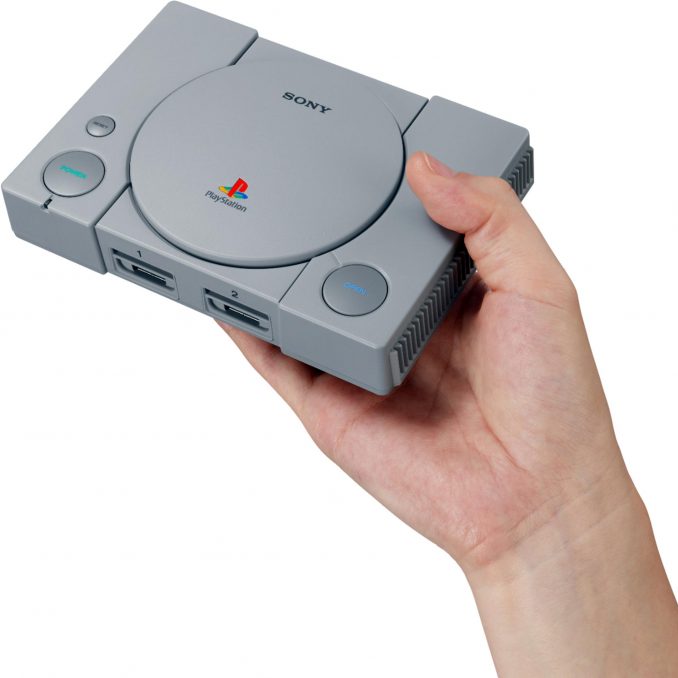 Revel in nostalgia by playing classic hits like Final Fantasy Vll, Ridge Racer Type 4, Tekken 3, Jumping Flash, and Wild Arms. They’re all preloaded in this console, as are 15 other games. Thus far they haven’t released the complete list of game titles included, but hopefully, it will include your favorites. Two controllers, that are just like the original PlayStation controllers, are included for head-to-head competition. 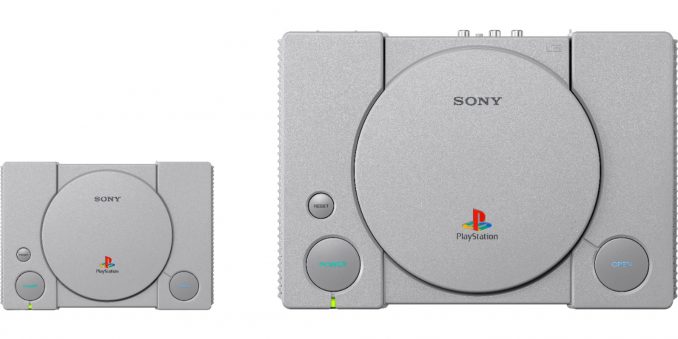 As you can see by the picture above, the Sony PlayStation Classic Console looks just like the original PlayStation, complete with the famous logo and same button layout, but is significantly smaller. They say it is 45% smaller, but that is just comparing the length and width. By volume, it is 80% smaller, and as you can see by the top picture, it’s tiny enough to fit in your hand.

Another significant difference is that this one has an HDMI output, so it is easy to plug directly into a modern TV. (It comes with an HDMI cable.) It’s also USB powered, so you just need to plug it into a USB port (needs just 5 Watts / 1 Amp) to give it juice. Also, you don’t need to mess around with discs (obviously it is too small for them anyway), as the games are just stored in memory. It has a virtual memory card for game saves.

A miniature recreation of the iconic PlayStation console, preloaded with 20 fan-favorite games along with two wired controllers for local multiplayer showdowns and a virtual memory card for vital game saves.

PlayStation Classic also features the same famous logo, button layout, and outer packaging, but this mini console is approximately 45% smaller than the original PlayStation and includes an HDMI cable to connect directly to a TV.

Pre-order the Sony PlayStation Classic Console now for $99.99 at Best Buy to get it by the release day, which is Monday, December 3, 2018. It would make an awesome Christmas present for anyone nostalgic for these classic video games.

Kisai Console is the name of the latest LED wristwatch from the famous Japanese company Tokyoflash. Just like the Kisai Satellite, the new model is rechargeable via USB. The watch is the third timepiece to go from a Tokyoflash Design Studio Blog concept – then […]

Are you going to be traveling alone soon? Going places, especially for business, can sometimes be a huge drag if you don’t have anyone interesting or anyone you know to keep you company. (I mean, if you did, then you could have a go at […]

If you aren’t worried about voiding the warranty on your game console, you can get in there and fix it yourself with this Game Console & Electronics Refurbishing Kit. This kit is designed for game consoles, PCs and laptops and it will work with the […]

If you love video games, but hate the high cost associated with them and gaming consoles, then you’re going to love this new KickStarter project. OUYA: A New Kind of Video Game Console, is an open gaming console concept that will work with your HD […]