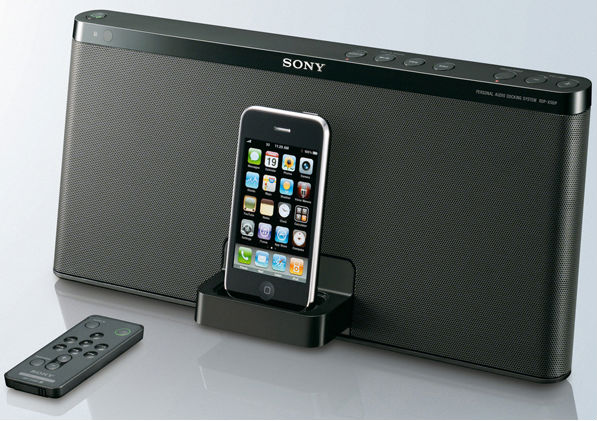 Sony has announced the RDP-X50iP, a new model to their series of speaker docks for the Apple iPod and iPhone, with the intention to deliver “the best possible audio quality at a price with the widest appeal”.

The heart of the RDP-X50iP is a specially designed digital amplifier and long-stroke driver units capable of delivering 20W + 20W RMS – in other words, real room-filling power.

Using the RDP-X50iP is simplicity itself: just slip in your iPod or iPhone for a charge and enjoy your favorite music at the same time. The omnidirectional infra-red remote gives you full iPod/iPhone menu control of music functions, so everything works just the way you would expect.*

Rather than relying on various pre-set modes for different styles of music, the RDP-X50iP is optimized for general use and will reward the listener with its sound whatever is playing. It looks as good as it sounds, with a restrained, minimalist design that is hugely versatile and will harmonize with virtually any interior.

The Sony RDP-X50iP is compatible with iPhone 3GS and current iPod models.

This sound system, designed like a motorcycle helmet, features a dock for iPhone and iPod that will lit up by blue LEDs when the motorized motion-activated visor opens up.

iGhost Speaker for iPod and iPhone

Who’s afraid of ghosts? Nobody, when the little guy lets you hear the music loaded on your iPod or iPhone, and the iGhost Speaker for iPod and iPhone looks so cute you don’t have to worry about any irritating screams interrupting your listening experience. The […]

Do you want to give your iPod that LEGO look?  The attachable Building Brick iPod Speaker comes in several colors and is a cool way to add a speaker to your iPod.  It won’t fit with LEGOs but it will work with the iPod (3-5th […]

Here is a gadget that will take care of all your iGadgets in one device. This docking system for your iPod, iPad, or iPhone will let you listen to your favorite music with powerful stereo speakers. Of course it also charges your devices and has a […]