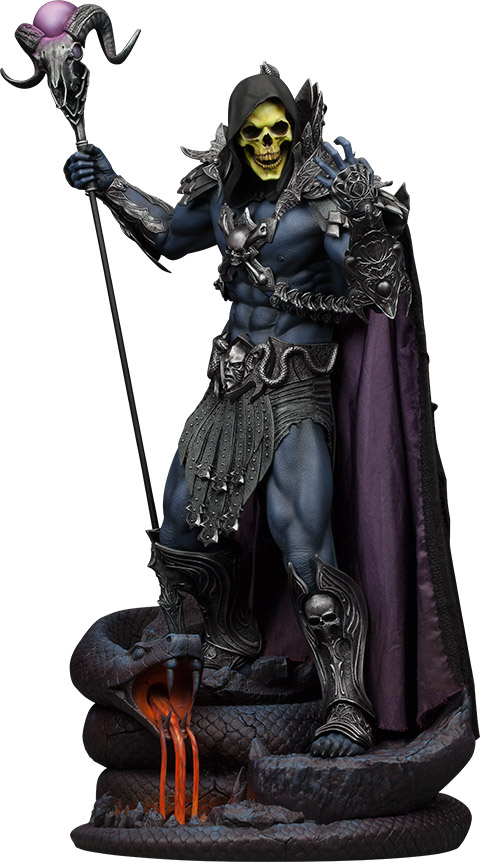 The Skeletor Statue is ready to be crowned master of the universe, with two distinct looks for He-Man’s arch-enemy.

Standing 21 1/2-inches tall with a base that resembles a coiled snake, Skeletor stands with his havoc staff at the ready, prepared to fight He-Man once again in an attempt to gain control of Castle Grayskull. Only the He-Man Statue has the power to stop his evil.

Featuring highly-detailed armor and a removable cape, the enemy of Eternia reveals another surprise – two interchangeable heads that let you choose either creepy or really creepy.

Masters of the Universe Skeletor Life-Size Bust with LED Eyes

Masters of the Universe Skeletor Plush

Masters of the Universe Skeletor Bust

Skeletor is back and he is sporting a shiny new look. This Masters of the Universe Skeletor Mystic Powers Hikari Sofubi Vinyl Figure is a limited edition of only 2,000 pieces worldwide and comes individually numbered. You have never seen He-Man’s arch-nemesis like this. He […]

He-Man’s twin sister fights for the honor of Grayskull as the She-Ra Statue. The Princess of Power is ready to stand against the Evil Horde as a 20-inch-tall statue that features details like patterned gauntlets on She-Ra’s arms and a removable red cloth cape with […]