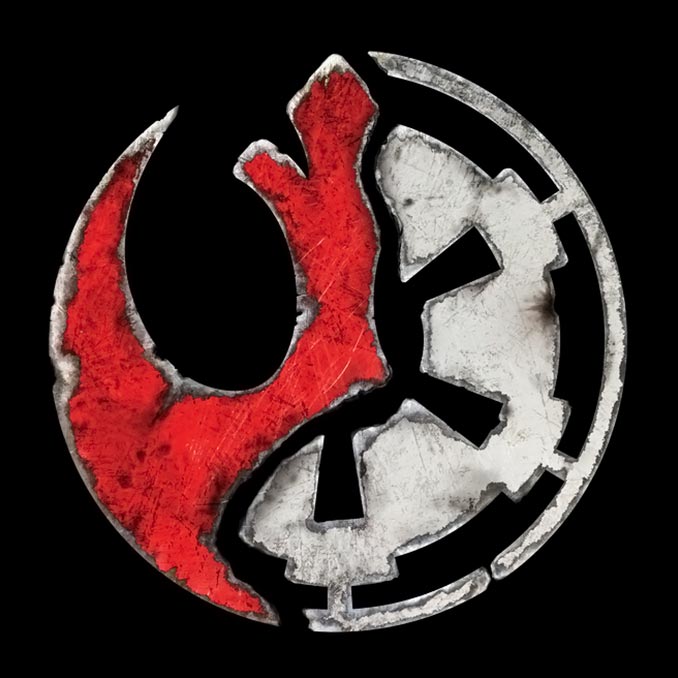 Like a Star Wars yin and yang this Shattered Rebel Empire T-Shirt combines a rebel insignia with that of the Galactic Empire. Good vs. evil. The light side vs. the dark side of the force. They are opposites, yet complementary. You can’t have one without the other. They’re interdependent, interconnected dualities. One is the Rebel Alliance Starbird, also known as the Phoenix, while the other is the Imperial Crest, the insignia of the Galactic Empire.

Shattered Rebel Empire T-Shirts are $21.95 at Neatoshop. They have this design available in a wide range of other options including ladies t-shirts, big & tall tees, hoodies, baby snapsuits, kids shirts, and posters.

You are going to look awesome in this Star Wars Rogue One Rebel Alliance and Galactic Empire Symbol Cut Out Stainless Steel Pendant Necklace and you won’t even have to choose a side. That’s because this necklace features both the rebel alliance symbol and the […]

This Star Wars Rebel Wallet isn’t the first Rebel Alliance bi-fold wallet. Previously we saw a cool one for X-Wing Pilots and last year there was another Rebel Badge Wallet that looked really nice. This one features a metal Rebel symbol on one side and […]

That’s okay. This Star Wars Rey Rebel Jersey Ladies’ Robe will have you feeling warm and cozy. It is a stylish black jersey knit robe with red trim and belt. It features a print of Rey, lightsaber in hand, against a red Rebel starbird logo. […]