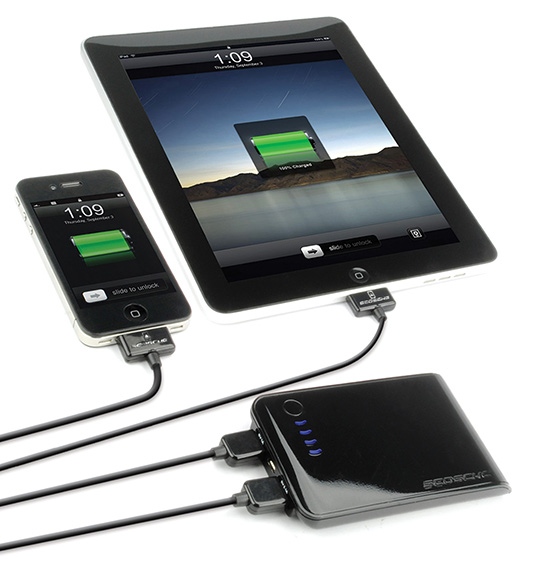 Today Scosche announced the availability of the goBAT II, their new portable charger and backup battery. It can charge two devices at once, such as a tablet computer and a cell phone. If you love your Apple iPad, but are constantly running out of power, this is your solution.

The Scosche goBAT II contains an internal 5000mAh lithium ion battery that is rechargeable. It is powerful enough to keep your portable digital devices running far longer than they normally would. For example, a fully charged goBAT II can recharge a drained iPhone 4—2.6 times! Similarly, it can charge up a totally drained iPad up to 55% of a full charge or fully recharge an iPhone 3G 3.3 times.

You can recharge two devices at the same time, since the goBAT II offers 2 USB recharging ports. One port offers 2.1 amps of power, ideal for tablets like the Apple iPad or Samsung Galaxy Tab. The other port offers 1 amp of power, which is great for most other mobile devices like an iPhone, iPod, or other cell phone.

Surprisingly small for how much power it packs, the goBAT II easily fits in your book bag. You don’t have to guess how much juice as left, as it features 4 blue LED lights that serve as charge indicators. It comes with a micro USB cable that is usable for recharging the goBAT II.

The goBAT II Portable Charger & Backup Battery is available for $89.99 from Scosche.com.

Scosche Industries, an award-winning innovator of consumer technology, just announced the availability of the Scosche bassDOCK. This adjustable speaker dock works with all iPad models and tilts and rotates for both landscape and portrait viewing angles. For people that love sound, the bassDOCK features a […]

If you’re in need of a powerful home charger for your electronic devices, you’re in luck. Scosche Industries just announced the release of Four New USB-Port Home Chargers at CTIA 2012. The new chargers work with the free Scosche reVIVE battery management app for both […]

They say timing is everything and Scosche Industries is sure good at that. They just announced their new iPad accessory line-up that will work with the third generation Apple iPad. The accessories include three new case designs, multiple charging solutions, a mount and two Bluetooth […]

How many times have you found yourself in a situation with a low battery only to realize you don’t have the correct charger? Sadly for me, it happens way too often. With half my devices being mini USB, and the other half micros USB, I […]