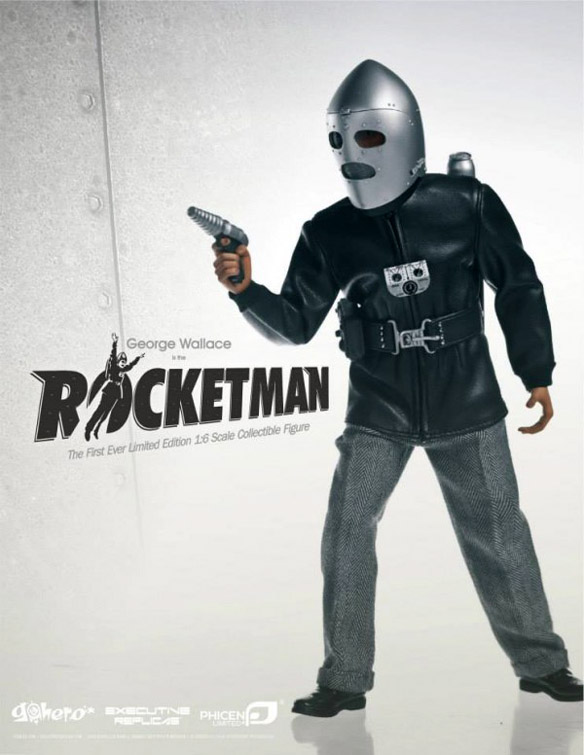 It’s time to blast off into the retro stratosphere with the Rocketman Action Figure.

These days, heroes like Superman, Iron Man, and Green Lantern make flying seem like an everyday event, but there was a time when flying – both in fiction and in real life – was a big deal, so Hollywood latched on to the fascination with soaring through the air with a variety of non-super-powered heroes.

This action figure features the likeness of actor George Wallace, who portrayed Commander Cody in the 12-episode science fiction serial, Radar Men From The Moon. The Rocketman character appeared in numerous other adventures, although he wasn’t portrayed by Wallace in all the films, and now it’s possible to let the old-timey action hero have a few adventures in the 21st Century.

We’ve seen some cool Batman Jackets before, but this Batman Begins Leather Street Jacket is probably the best yet. First, it is a sharply designed leather jacket that would look tough and stylish while cruising on anything from a motorcycle to a Batmobile, or even […]

A classic movie meets a new one when Pulp Fiction and Guardians of the Galaxy join forces for the Guardians of Fiction T-Shirt. When you think about it, having a giant plant and a talking raccoon guard fiction makes perfect sense, and having Rocket Raccoon […]

The spirit of Pulp Fiction pops up again on the Doctor Who Time Fiction T-Shirt, bringing us not one, but two Time Lords just taking care of business. We recently showed you the result of mixing Pulp Fiction with Guardians of the Galaxy, but this […]

The joke will be on you if you don’t get this cool Suicide Squad: ‘The Killing Jacket’ Joker Leather Jacket. Seriously. People will laugh at you. You might not have white skin, green hair, or a crazy girlfriend named Harley Quinn, but you can still […]