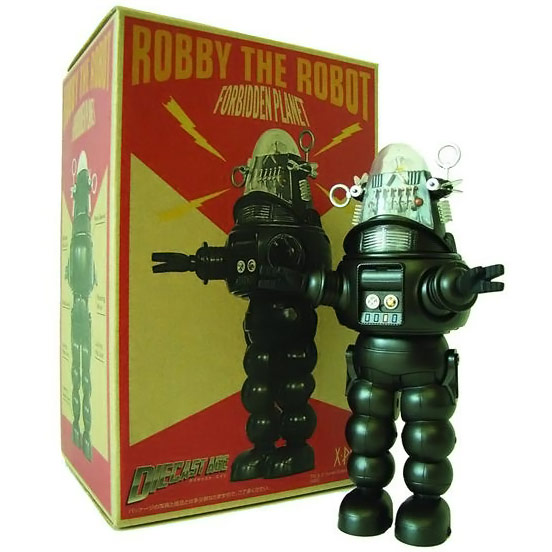 Fans of vintage science fiction will perk up when they see the Robby the Robot Black and White Version Die-Cast Figure because he’s probably one of the most recognizable characters in sci-fi history.

First seen in an almost villainous light on the movie poster for the 1956 movie, “Forbidden Planet,” many sci-fi fans were a bit disappointed that no scene actually existed in the film where Robbie carries off a woman; but that didn’t stop the recognizable figure from becoming a sci-fi icon, and the endurance of his popularity was proven in 2004 when Robby the Robot was inducted into the Robot Hall of Fame.

The die-cast version of Robby stands 7-inches tall, has 12 points of articulation, and a black-and-white color scheme, and he comes packaged in a box that contains some eye-catching retro-style artwork.

Add a classic to your collectibles with the Robby the Robot Black and White Version Die-Cast Figure. It will be available October 2013, but can pre-ordered now for $74.99 at Entertainment Earth.

Fans of the classic Forbidden Planet robot will enjoy displaying this Forbidden Planet Robby the Robot Pop! Vinyl Figure in their collection. Robby looks adorable in Pop! Vinyl style. He stands 3 3/4-inches tall and has lots of screen-accurate detail. Just look at the various […]

Many people, including me, love the walkers from the Star Wars movies like the AT-AT and AT-ST. They were really cool war machines and made for great toys. Now with the Clone Wars, there are more walkers available such as the All Terrain Attack Pod […]

Get ready to test your luck with the DC Comics Girls 6-Inch Metals Die-Cast Figure Case. Standing 6-inches tall and made of die-cast metal, the heroic and villainous girls of DC Comics are ready to join your action figure collection. BUT… a little bit of […]