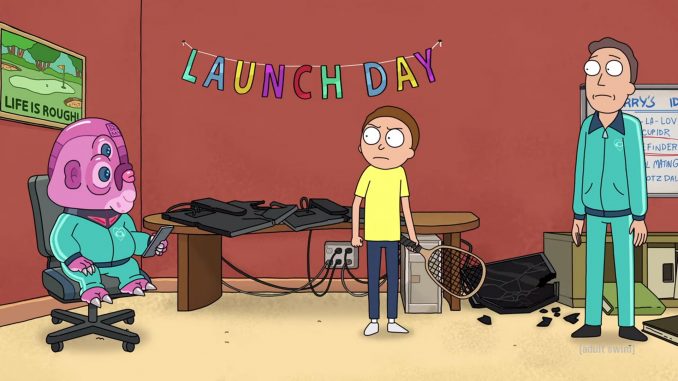 You can rest assured that a new season of Rick and Morty is on the way, and even watch this Rick and Morty Season 4 First Look Video to prove it. It features Morty and his dad Jerry fighting with an alien app developer named Glootie. Season 4 is supposed to kick off in November 2019.

Watch the Rick and Morty Season 4: Glootie from Adult Swim:

Rick and Morty is Adult Swim’s most scientifically accurate animated comedy. Created by Justin Roiland and Dan Harmon, it catalogues the bizarre misadventures of a bored scientific genius/drunkard and his socially awkward grandson, Morty. Their exploits tend to have unintended consequences for Morty’s dysfunctional family, especially his unfailingly mediocre father, Jerry. Watch Rick and Morty battle everything from interdimensional customs agents to Cronenberg monsters now.

Rick & Morty: The World According to Rick Book

If you can’t get enough Rick Sanchez from Rick & Morty, you’ll want The World According to Rick Book. It’s filled with 160 pages of his quotes along with color illustrations from the show. You have his funniest line, witty observations, insane ramblings, and angry […]

You’ll never be lonely if you have this Rick and Morty Giant Inflatable Pickle Rick to keep you company. He’s big enough to sit with you while you binge watch Rick and Morty. In fact, when they say “giant” they mean it, because this big […]