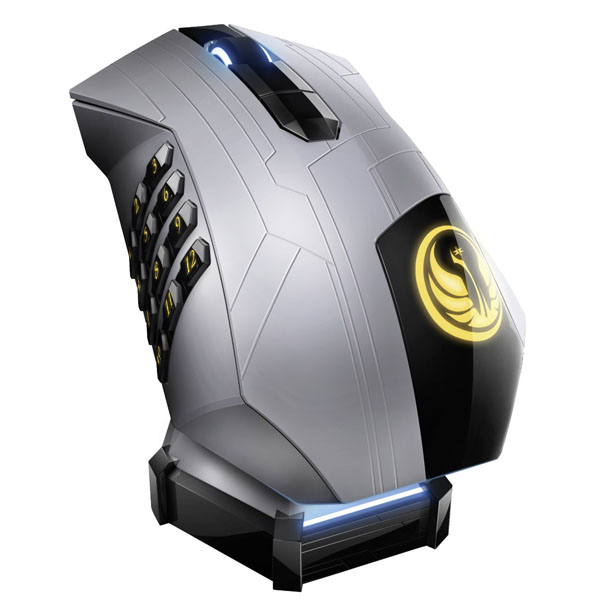 Tensions between the Sith Empire and Galactic Republic have erupted into an explosive battle and like a scoundrel smuggler, you can benefit. This Razer Star Wars The Old Republic Gaming Mouse is a must have for serious Star wars fans.

This awesome mouse is a tool of gaming destruction as it will let you cut down enemies faster and execute battle plans quickly. It features 17 buttons and that means you have more control over everything. Heck, it even looks like a ship. It also has gaming grade dual wired/wireless technology for freedom of maneuverability when unwired without losing any control or accuracy.

Tensions between the Sith Empire and Galactic Republic have erupted into an explosive battle of epic proportions. War is coming and whichever side you choose, only those armed with the Star Wars: The Old Republic Gaming Mouse by Razer will emerge victorious. Cut down enemies in swathes, and execute battle plans faster when the mouse equips you with an astonishing 17 buttons to put more abilities at your fingertips.

To charge it up just switch the mouse to wired mode and never leave the action. Grab your Jedi wallet and lay down $195 over at Amazon.

Are you looking for the ultimate gaming mouse?  This Razer Mamba 4G Gaming Mouse is set to take gaming to a whole new level.  It has a 4G dual sensor system that uses both optical and laser sensors to better “enhance tracking precision by calibrating […]

If you’re looking for a mouse that has some style and you like all things TRON, check out the Razer TRON Mouse with an ambidextrous design from Razer. It was inspired by the world of the TRON movies, with light alerts based on in-game actions. […]

Fans of the movie TRON will want to get their game on with this cool stylish Razer TRON Gaming Mousemat. It’s a hard Mouse Mat with Tracking Glow Trail. This means that you can create a TRON blue glow trail behind your TRON Gaming Mouse […]

Say goodbye to ordinary buttons and scroll wheels, and hello to intuitive control of PC functions with the Speedlink CUE Wireless Multitouch Mouse. At first this may just look like an ordinary computer mouse, although with a super smooth and sleek design. However, this innovative […]

This Iron Man Wired Gaming Mouse lets you point and click the Marvel way. Just like the real armor, it has retractable metal components that look shiny and awesome. That makes it one tough mouse. It features an adjustable polling rate and DPI. This is […]

Gamers are always looking for an advantage and sometimes little things like a gaming mouse can make a world of difference. ROCCAT studios just announced the upcoming release of the ROCCAT Savu Gaming Mouse. This is mouse combines performance and customizable features into a perfectly-balanced, […]

The Art & Making of Star Wars: The Old Republic