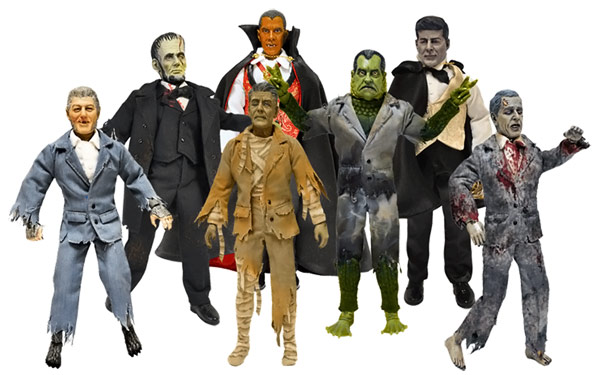 I think most people talk about putting a monster in the White House after every election but those words have never been more true than when talking about the Presidential Monsters Action Figures, a twisted collection that blends seven historic figures with the iconic Universal monsters of old-school Hollywood.

The White House staff will be covering the Oval Office in garlic while the Secret Service ditches their guns for flame-throwers if this macabre crowd of politicians ever decides to run for office…but these guys would definitely make high school Government class a lot more fun to sit through. 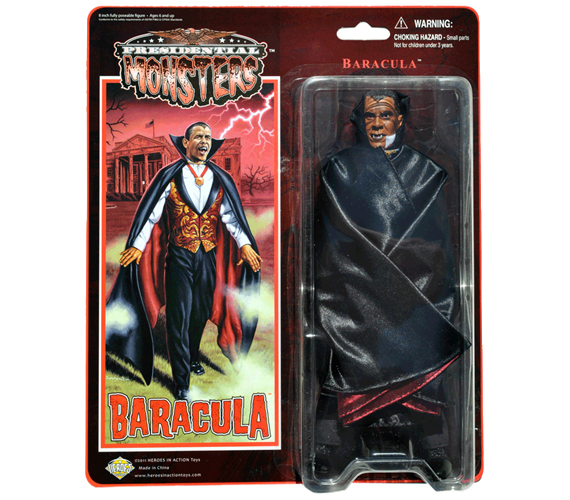 Each figure is 8 1/2-inches tall, fully poseable, and dressed in a cloth costume.

In history class we learned that Abraham Lincoln was one of the best American presidents. Now from the movie “Abraham Lincoln: Vampire Hunter” we find out that he was one tough dude. Celebrate the 16th President of the United States with these Badass Abe Lincoln […]

In a parallel world somewhere, the U.S. is ruled by a Zombie president Lincoln and he is craving the brains of all Americans. And whether they elected him out of office eventually or forced him out, this Zombie Abraham Lincoln Oil Painting is sure to […]

When you get a cut or a scrape, it’s a good idea to put a bandage on that wound. Remember when the country had some terrible wounds? Who was the man that made things better? That’s right. It was good old honest Abe. So there’s […]

From the looks of this Zombraham Lincoln Shooter, the 16th president of the United States was hungry for truth, justice, and brains. Four score and seven years ago (or considerably longer), Honest Abe was attacked by a zombie. The government kept a lid on the […]

The very thing that makes the iPod shuffle 4G so great -its ultra compactness- is also what makes it the easiest thing to lose. The remedy? Dress up your iPod shuffle as a colorful, one-eyed monster. The Silicone Mix Monsters iPod Shuffle 4G Case by Fred & Friends gives […]

Monster fans are going to love this Universal Monsters ReAction Blue Glow Action Figures with Crypt set. This large crypt opens to reveal the Universal Monsters in spirit form. These figures are cast in translucent blue-glow plastic with a white wipe. You get the ghosts […]

There was a time when cloth was king when it came to action figures, or at least it seemed like it was because even characters that didn’t wear clothes were going with the cloth look. The Universal Monsters Series 3 Retro Cloth Action Figures bring […]

Scary stories are one thing, but when the monsters actually come out of the book, that’s taking things to a whole other level. This Harry Potter Monster Book of Monsters Plush looks terrifying. Plus it shakes and vibrates. Quick, pull up your covers and hide […]