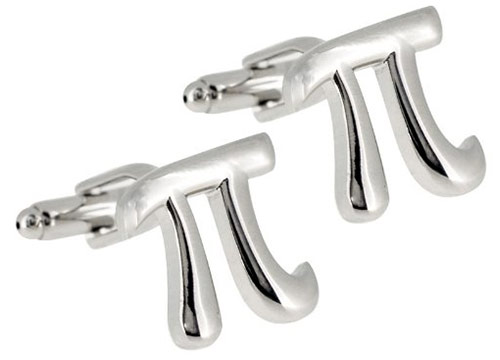 So far for Pi Day we’ve posted a T-Shirt and a Silk Tie.  Both are cool, but the Pi symbol on each is very big and bold. Those are fine if you’re assertive and proud of your geekiness, but if you’re a bit shy, you might prefer something more reserved such as these Pi Symbol Silver Cufflinks.  This way you can wear something Pi (to keep from getting pinched by other geeks on March 14), but they won’t be noticed by everyone.  Of course, everyone will be wondering why you showed up in a dress shirt with French cuffs instead of your usual t-shirt.

According to the site selling these Pi Silver Cufflinks, they are feature an “exquisitely detailed designer style,” without offering any other details.  I guess the picture is information enough, so I’ll use this space to give some history on Pi Day from Wikipedia.

Pi Day is an annual celebration commemorating the mathematical constant π (pi). Pi Day is observed on March 14 (or 3/14 in month/day date format), since 3, 1 and 4 are the three most significant digits of π in the decimal form. In 2009, the United States House of Representatives supported the designation of Pi Day.

The earliest known official or large-scale celebration of Pi Day was organized by Larry Shaw in 1988 at the San Francisco Exploratorium, where Shaw worked as a physicist, with staff and public marching around one of its circular spaces, then consuming fruit pies. The Exploratorium continues to hold Pi Day celebrations.

Pi Symbol Cufflinks are on sale for only $18.99 at Amazon.com.  If you get these, you might as well by a matching Pi Lapel Pin too, as it is only $5.

Beer-drinking geeks aren’t just going to step out donning Budweiser cufflinks in their Sunday best. Instead, you might see one walking around with Beer Molecular Structure Cufflinks, which are more discreet, enigmatic and nerdy to the tenth power. Any chemist, biologist or engineer will automatically clue into what those very important […]

Remember the App Button Cufflinks from last week? Well if you love your cell phone, and not just specific apps, you’d probably prefer these iPhone / Smartphone Cufflinks. When you have to attend a formal event, you can still show your geeky side with techie […]

Show a little Fight Club spirit next time you head to the office with the Brass Knuckles Cufflinks. Designed to look like the real thing, these sterling silver cufflinks are the perfect accessory for a big business meeting to show your competitors that you’re no […]

GeekAlerts has shown some pretty cool cufflinks in the past like: iPhone App Buttons, Facebook Like Dislike and even Remington 270 Win cufflinks.  If you are a true gun person, or from Texas, then you will love the real Colt .45 Cufflinks.  These cufflinks are […]

Remember those fun, cool and stylish USB flash drive cufflinks that we wrote about here at GeekAlerts a couple of months ago? Now you can get these fashionable storage accessories in three different colorful versions.

Are you still searching for that prefect Father’s Day gift? If so, you can’t go wrong with the R2-D2 USB Flash Drive Cufflinks. These cufflinks not only look like our favorite Star Wars droid (sorry C-3PO), but they also function as USB flash drives. The […]

Those who can’t live without their Apple smartphones would probably like to get a pair of these iPhone Cufflinks. Gun buffs might prefer the style that the Colt .45 Cufflinks offers, but if you graduated with a bachelor’s degree that had a lot of chemistry […]