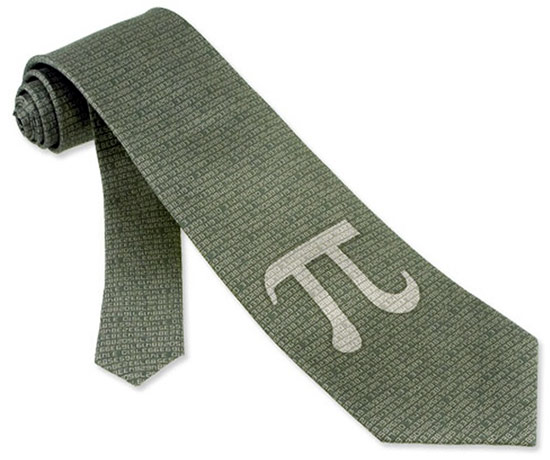 We started our Pi Day 2013 coverage with a really cool Pi T-Shirt.  If you are a lawyer, banker, executive, or anything else that requires formal dress, wearing a tee isn’t an option.  What you need is this PI 50th Decimal Silk Tie.  Like the aforementioned Pi t-shirt, this silk tie features the Pi symbol as well as many digits of Pi.  I always thought I was pretty good for having it memorized to seventh decimal place (3.1415926), but this Pi tie takes it much further.

Not for the wanna-bes or the imitators, this necktie is for the true and the proud. This tie is for the nerds. Featured within this grand necktie is the great and almighty symbol of Pi. However, it is behind this symbol where the real intellect lays. It is here that pi is calculated in all its glory to the fiftieth decimal point. Your math teacher may know pi to the fifth decimal and you may even have a friend who knows it to the twelfth, but you are sure to impress them all when you have pi to the fiftieth decimal point. With pi it is all about respect and if you are sporting anything below 25 you may as well go home. And you don’t want to go home, so sport your pride and receive the respect you deserve. Your time is now.

I’m no math genius, but if I was, I would show off by wearing this Math Equations Silk Tie. I can’t understand any of it, but I know it would make a great gift for my geeky math loving friends. This tie is 100% silk […]

You are going to look awesome in this Star Wars TIE Fighter Silk Tie. It is an elegant accessory for a more civilized age. It shows your Imperial leanings while keeping things classy. It is black with grey TIE fighters all over. It’s perfect for […]

“How To Tie A Tie” Necktie

I don’t have to wear a tie very often so I always forget how to tie a tie when I need one. If you are like me, this “How To Tie A Tie” Necktie will come in very handy. It tells you exactly how to […]

This X-Wing Silk Tie is full of a squadron, make that many squadrons of awesome X-Wing fighters, along with the rebel alliance logo. It is an elegant accessory for a more civilized neck. This awesome Star wars tie makes a fun gift for Star Wars […]

This Star Wars Darth Vader Paisley Silk Tie will definitely sway you toward the dark side, while upping your style. This tie looks good. It’s an elegant accessory for a more civilized fan. It features a paisley print with Darth Vader heads and TIE Fighters. […]

You know those really ugly Christmas sweaters? Yeah, don’t wear those unless you are making fun of them in some way. They are just bad. Instead, wear some Christmas spirit around your neck with this neat Silk Christmas Tree Tie. It has Christmas trees all […]