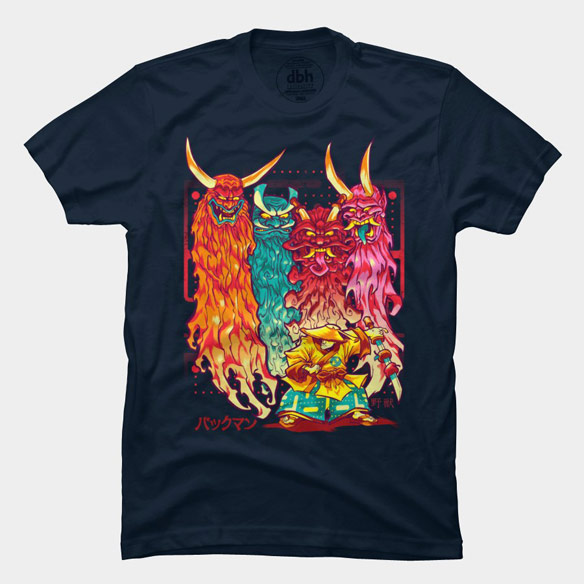 There’s a cool story surrounding the Pakku-Man T-Shirt; so cool in fact that it doesn’t matter if it really reveals the origin of Pac-Man or not.

The artist going by the name BeastPop has figured out how to take the Internet by storm. First, create an awesome eye-catching image. Second, provide an awesome story that could possibly be true to go along with the image.

Most gamers have probably heard the lame (in my opinion) theory that a pizza missing one slice inspired the creation of Pac-Man, but BeastPop’s story sounds so much better:

This bright design is based on a recently discovered rare Japanese print which is rumored to have contributed to Toru Iwatani’s inspiration for the genesis of the greatest arcade game ever created! It was a commonly-held misconception that a simple pizza (missing a slice) was the true inspiration for the celebrated arcade classic, but that’s clearly a bunch of bologna! It was a print that had been in his family for generations, but had been lost in a warehouse shortly after his tragic suicide.

Now don’t get too excited over the origin of the classic video game icon finally being revealed. The only websites with this ‘news’ are t-shirt websites, who received their info from the artist himself.

Is the story true? Probably not. Does that make it any less awesome? Absolutely not. Is the shirt still cool? Definitely.

The Pakku-Man T-Shirt is available for $24 at Design by Humans.