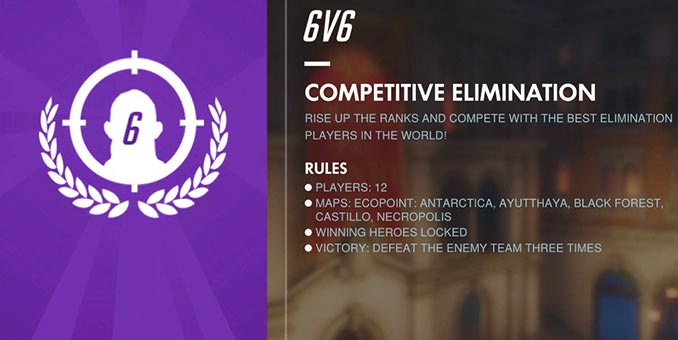 In a surprise update, Blizzard added Overwatch Competitive 6v6 Elimination. It started today at 5PM PDT and will last until 5PM PDT on May 7, 2018. It is Lockout Elimination, which means that the heroes from a winning round are not available to that team for the rest of the game. With fewer and fewer choices, you may be forced to choose a hero you haven’t played much, which gives you the opportunity to extend your comprehensive skills and be a more versatile player. A smart team will look forward and make sure they have enough heroes left for a good team composition after they’ve won two rounds.

The “Lockout” rule in place, so once a team wins with a hero it becomes unavailable for that team for the duration of the match. All the previous Elimination maps are available to play this season, but we’ve also added Ayutthaya to the mix as an Elimination map.

To play, simply choose the Competitive Elimination card in the Arcade!