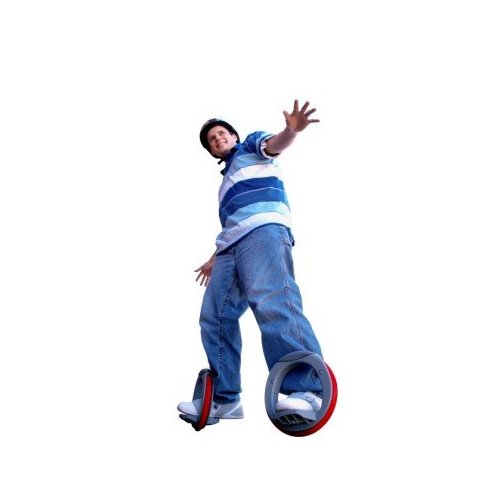 Introducing Orbitwheels, a close cousin of the Skatecycle shown in an earlier post. These curious contraptions are modernized skates that don’t require lacing up and are more compact than roller blades.

All you need are two feet. Step one foot into the middle of each wheel’s foot rest and move your legs forward and backward, opposite each other.

Orbitwheels are quick on and off, and require moving sideways to get where you want to go, similar to a skateboard. But with the larger wheels on Orbitwheels, you can ride on rougher terrain than concrete, such as on grass. Your legs are free to move so that you can do rollerskate-like spins and come up with some interesting tricks.

Inventist, the company that brought us the Solowheel Gyroscopic Electric Unicycle, was also behind the creation of Orbitwheels. Like concept cars, Inventist’s products are a step ahead, boasting originality in engineering and design.

While the Segway was a revolution in personal transportation, the Solowheel is the latest evolution in electric vehicle technology. Similar to a Segway, the Solowheel features gyroscopic sensors to maintain perfect balance, and the rider controls speed and direction by leaning. It is also similar […]

The DFX Gamer Gyroscopic Powerball lets you get a good old hand workout without having to go do complicated or highly repetitive exercises. Increase your flexibility, quickness, range of motion, finger and grip strength by doing some smooth, non-impact workout using the Powerball. The DFX Gamer […]

This past week we’ve seen a very eclectic mix of gadgets and geekiness. There were fun items like the FuBmatte Slide To Unlock Doormat, Simpsons Duff “Beer” Energy Drink, and Yummy Dough, as well as practical items like the Zippo Emergency Fire Starter Kit, Switch […]

Current Tire Rack Coupons When you need a new set of tires or want to upgrade your wheels, check for Tire Rack Coupons for the best discount offers. On that page you’ll find current and up-to-date listings of Tire Rack coupon codes, free shipping specials, […]

Magic is the ultimate icebreaker. Boring first date? Humdrum children’s party? Meeting going awry? Take the opportunity to make the moment a little lighter by performing one of the tricks from Ridley’s Classic Magic Kit. There are five different magic tricks to choose from so at […]

It’s kind of a mean joke to play on someone, but this Foot Doorstop will let you trick people into thinking that someone’s foot is stuck under the door. This is a fun way to keep your door in place and whenever you feel like […]

Satechi, a leading mobile accessories manufacturer, just announced the availability of the new Satechi Audio Move SD Portable Speaker. Designed for people on the go, the Audio Move SD is a compact, portable speaker that has a 3.5mm audio jack and a microSDHC card slot […]