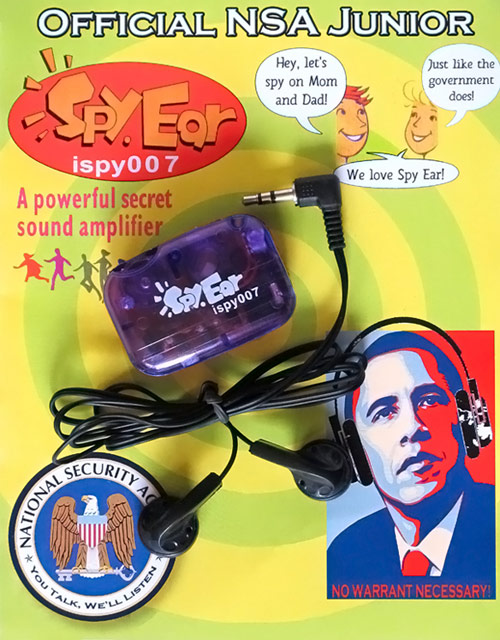 Wouldn’t it be great to listen in on everyone’s closely-guarded secrets? The NSA has taught us that personal boundaries and respecting privacy is an out-dated way of thinking; so follow their example with the NSA Junior Spy Ear Listening Device and get started in the sometimes-lucrative business of trading secrecy for cash.

Listening devices aren’t new. I had one when I was a kid. It had bulky headphones and a gun-like device with a huge radar dish on the end of it. Not exactly subtle. Fortunately, technology has come a long way and it’s possible to look innocent when you’re being sneaky.

The device consists of an amplifier, earbuds, and extra batteries that allow you to spend extra time gathering data… because nothing sucks like running out of power just as the gossip starts to get juicy.

Forget about being James Bond and getting a license to kill. The real power comes with a license to listen, and your first step on the road to becoming a collector of secrets begins with the NSA Junior Spy Ear Listening Device for $10.95. (Update: Link removed because the website is gone and no other stores were found with this product.)

If you have pierced ears and like to freak people out, you need a pair of these Little Third Ear Earrings. They’re handmade earrings that look like a tiny little ear. With another version (pictured on top of this page) that ear has a teeny […]