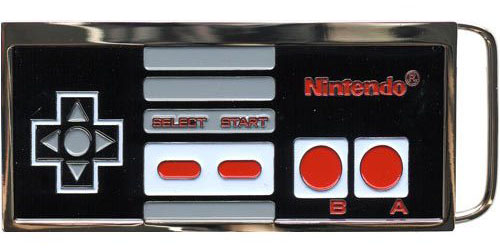 I happen to catch a rerun of the Big Bang Theory the other night and noticed that Howard had a very cool NES Belt Buckle on…poor guy still didn’t have any luck with the ladies that night. Since I was jealous of his cool Nintendo belt buckle, I did some research and found it.

This officially licensed Nintendo belt buckle is one of the better representations of that classic 8-bit controller. Made from solid metal, it is roughly 5″ x 2″ and has the classic NES paint scheme. Pull your pants up and put your NES Belt Buckle on, you’re going out tonight!

You can pick up your NES Belt Buckle at Amazon.com from $8.24

GeekAlerts has shown you some really cool belt buckles in the past. Yoda, Boba Fett, Zelda Triforce, and several others are all good choices, but since variety is always a good thing, you might want to add one more buckle to your collection. The Nintendo […]

Do you need another cool metal belt buckle for your collection? How about the TMNT Heads Metal Belt Buckle? This 4.5 inch wide and 2.5 inch tall buckle features your favorite heroes in a half shell. Strap the Teenage Mutant Ninja Turtles belt buckle on […]