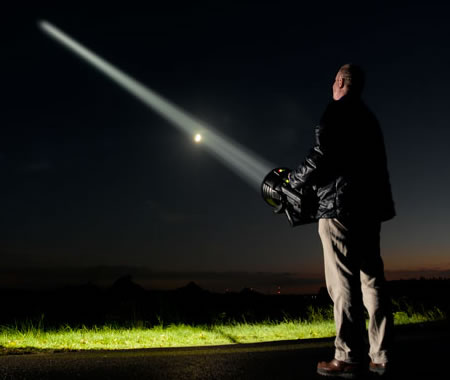 Ralf Ottow, a Dutch optics engineer, has designed the Maxblaster – a flashlight powered by 54 batteries, capable of producing a beam of light four miles long.

Ottow stripped out the innards of a powerful commercial flashlight and switched in a mercury arc bulb, which generates light by creating an ultra-hot plasma between two closely spaced electrodes inside the gas-filled central chamber of the lamp. 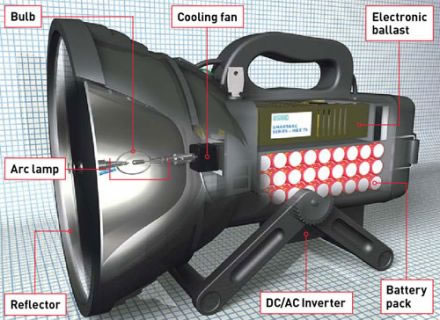 That results in a brighter, more focused beam but also kicks out more ultraviolet light (hence the sunburn, a product of early testing). So he added a specially coated reflector and designed, ground, and coated a new glass window that would trap UV rays while still pumping out light.

Via a bunch of great blogs:

The stylish Lumi is a battery-powered LED flashlight that doubles as a lantern, capable of spreading the light in three different ways.

What’s the first thing you reach for during a blackout? A flashlight. Of course, there’s the emergency light, but for most occasions, what you’d be looking for is your very own flashlight. Some cellphone manufacturers were onto something when they manufactured their phones with an […]

Not that long ago we covered the Pig LED Flashlight, and here we have yet another light source designed like an animal from the Chinese horoscope.

Are you looking for that perfect little gift for your man or woman this Valentine’s Day? If they are the type of person that gets pumped by anything with the word tactile in it, then they will love this Tactical Defense Flashlight. It is perfect […]

This highly durable aluminum LED flashlight allows you to record both audio and video. The recorded material is stored in AVI format on the built-in 4GB memory and can easily be transferred to another device via USB. Here is video clip showing the flashlight video […]