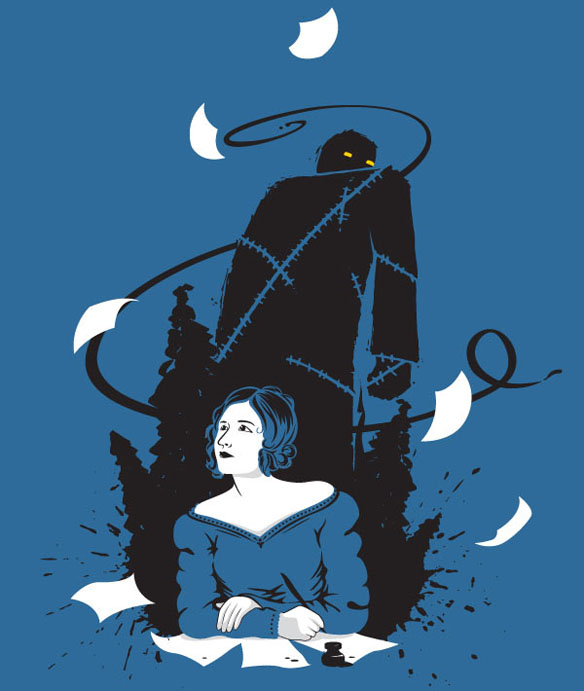 Where would the world of fiction be without Mary Wollstonecraft Shelley? We probably don’t want to find out because books would probably be rather boring. Now, you can celebrate this literary pioneer with the Mary Shelley T-Shirt.

Mary Shelley not only brought us Frankenstein and his monster but also opened the door for the now-stereotypical mad scientist, which was actually a brand new idea when she put pen to paper… or quill to parchment or whatever it was back then. One thing I know for certain is that she didn’t just power up her laptop when she had the urge to be creative. 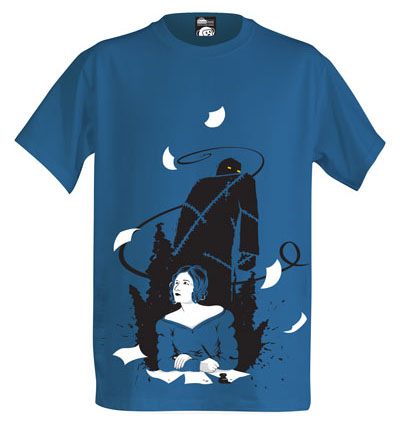 The 100% cotton indigo t-shirt features the talented author working at her craft in front of pine trees and the legendary monster that she created with nothing but the power of imagination. No dead bodies were harmed when she stitched together her beast. Why are pine trees on the shirt? Well, probably because in her intro to the 1831 edition of Frankenstein, she wrote, “I wrote then—but in a most common-place style. It was beneath the trees of the grounds belonging to our house, or on the bleak sides of the woodless mountains near, that my true compositions, the airy flights of my imagination, were born and fostered.”

It’s a shame that quote isn’t actually on the shirt but I guess we can’t have everything. Still, the Mary Shelley T-Shirt is a nice shirt, and at its current sale price of $9.99 (reg. $16.99) over on ThinkGeek, it’s a great addition to the wardrobe of any writer or Frankenstein fan.

Fans of Mary Shelley and Frankenstein will be interested in the Shelley’s Creation Polystone Statue that brings us an awesomely realistic look at the creature stitched together by Dr. Frankenstein. The statue, which happens to be the first in the Ghastly Graves collection, features incredibly […]

The Bloody Mary was the first cocktail I’d ever heard of, so naturally, it was the first one that I tried. Let me just say that it has now become one of my favorite drinks because of its strong and incredibly flavorful taste. If it’s […]

What does the Frankenstein monster do when preparing for a date? He gets screwed… or at least that’s what the Frankenstein Grooming Wrench T-Shirt seems to suggest as we peek in on ol’ blockhead as he uses a wrench to make sure everything is nice […]

Face it, Tiger. You just hit the jackpot with the sexy Mary Jane Polystone Statue, featuring Spider-Man’s favorite redhead striking a sexy pose. Peter Parker stretched the limits of imagination in the early days of the Spider-Man comics, and not because he had the proportionate […]

A Guardian of the Galaxy meets a magical nanny with the Guardians I’m Mary Poppins Y’all T-Shirt. Okay, slight spoilers if you haven’t seen Guardians of the Galaxy 2 yet. For those 4 or 5 waiting for it to come out on Blu-ray, I’ll be […]

This year, we’re seeing a lot of Halloween costumes that are knockouts even though they are surprisingly simple. Some that come to mind are the Cutie Candy Corn Dress, Bones Tank Dress, GlowGirl Costume, Minecraft Steve or Creeper Heads, Star Wars Inflatable Tauntaun Costume and Inflatable Jabba the […]

Today is April 22, which means it is Earth Day. While most of us gadget geeks couldn’t give up our electronics for the day, it is still a good time to think about what we can do to be for environmentally friendly. Fortunately, one eco-friendly […]