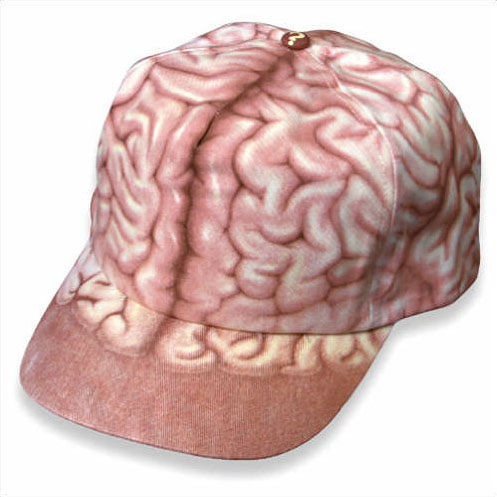 Some people wear their hearts on their sleeves, but you can be among the first to wear your brain on your, well, head with the Magic Brain Cap.

Despite its name, there’s nothing magical about the Magic Brain Cap. It’s basically got an image of a brain printed on its surface to give the illusion that the wearer’s brain is exposed for the entire world to see. It’s probably not the best idea to wear cap around zombie infested areas, since you would basically be advertising free lunch for all the hungry undead.

But anyway, if you are willing to take the risk, then the Magic Brain Cap is available for $9.95 from Amazon.

If you are a big fan of the whole brain in the jar thing, why not put the whole thing to candlelight with this Brain Candle? If you smell it burning, then it must be deep in thought. This hand-sculpted brain candle is suspended in […]

Remember the Giant Gummy Heart from a couple days ago? Although it weighed in at a full pound of gummy goodness, it was just a baby compared to this Giant Gummi Brain. Yes, this gummy candy brain is 7 pounds (over 3 kg) of fruity […]