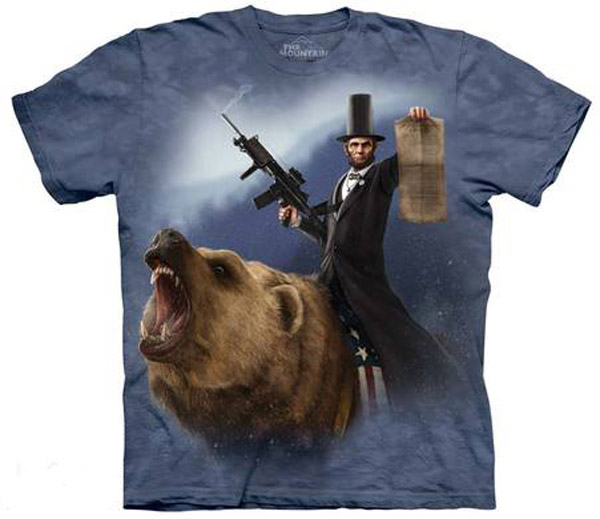 Four score and seven years ago, Honest Abe picked up an automatic rifle, climbed on top of his trusty grizzly bear, and rode around to kick all kinds of butt. At least that seems to be the story implied by the Lincoln The Emancipator T-Shirt.

Any guy that can ride a bear using nothing but a flag for a saddle gets my vote, and I’d vote for him to be president for life if he used a gun that hadn’t even been invented yet. Abraham Lincoln did many great things while he was in the White House, but just imagine how much more awesome he could have been if he rode around the nation on a bear.

Whether you’re a fan of the 16th President of the United States or bears, or just enjoy great art that features a president on a bear, you can get the Lincoln The Emancipator T-Shirt for $20 at The Mountain.

In history class we learned that Abraham Lincoln was one of the best American presidents. Now from the movie “Abraham Lincoln: Vampire Hunter” we find out that he was one tough dude. Celebrate the 16th President of the United States with these Badass Abe Lincoln […]

In a parallel world somewhere, the U.S. is ruled by a Zombie president Lincoln and he is craving the brains of all Americans. And whether they elected him out of office eventually or forced him out, this Zombie Abraham Lincoln Oil Painting is sure to […]

When you get a cut or a scrape, it’s a good idea to put a bandage on that wound. Remember when the country had some terrible wounds? Who was the man that made things better? That’s right. It was good old honest Abe. So there’s […]

From the looks of this Zombraham Lincoln Shooter, the 16th president of the United States was hungry for truth, justice, and brains. Four score and seven years ago (or considerably longer), Honest Abe was attacked by a zombie. The government kept a lid on the […]

Zombies have gotten to the 16th President. Save up in his memory with this Zombie Lincoln Memorial Coin Bank and honor him so that his sacrifice was not in vain. Four score and seven years ago this forefather of our nation was bitten and became […]