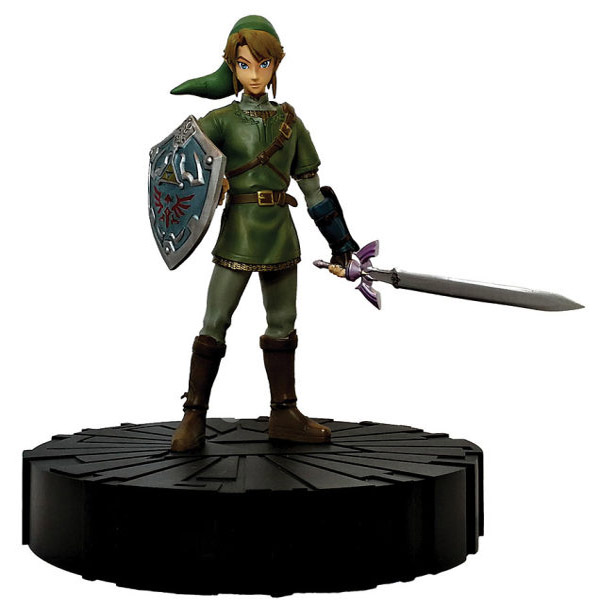 Poor Link, stuck being the main character in a game that doesn’t even give him credit in the title. Fortunately, he has the Legend of Zelda: Twilight Princess 10-Inch Link Statue to show people and let them know how important he is. Legend of Zelda, indeed! It should be Legend of Link.

The 10-inch-tall statue, officially licensed by Nintendo, features a highly detailed likeness of the hero from the popular game, and he even has the Hyrule Shield and Master Sword… because it’s dangerous to go alone.

Dressed in his classic green clothing, the statue stands upon a circular base and comes in a gatefold window box, which is perfect for the collector who likes showing off his goodies without opening them.

The Legend of Zelda: Twilight Princess 10-Inch Link Statue will be available September 2014 but it can be pre-ordered now for $69.99 at Entertainment Earth.

Link can finally take it easy because it won’t be too hard to find this Legend of Zelda Twilight Princess Statue, featuring a highly-detailed look at the young ruler of Hyrule from the popular video game. Standing 17-inches tall (including base), the hand-painted polystone statue […]

Are you ready for another classic Nintendo game to get a pulpy twist? Good, because the Legend of Zelda ‘Twilight Gal’ Poster is here for your viewing pleasure. Artist Astor Alexander, the same creative genius who brought us the Mario ‘Taken… Again’ Poster, shows us […]

This Legend of Zelda Twilight Princess Suit Up Bi-Fold Wallet looks awesome. You know how it is, you cap out at 99 rupees and can’t carry anymore. Well, it’s time to upgrade with this wallet. This wallet will increase your carrying capacity and look darn […]