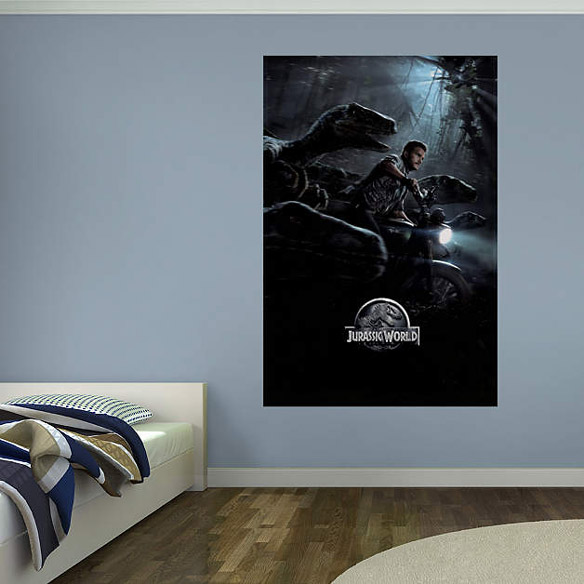 The latest film in the Jurassic Park franchise is filled with plenty of awesome but the Jurassic World Chase Mural shows one of the best scenes in the entire film.

We knew Chris Pratt’s Owen was a cool dude when he ran into the Raptor pin and saved the new guy with nothing but upraised hands but his level of kick-buttitude elevated into previously uncharted territory when he was racing through the jungle on his motorcycle with his team of Raptors on either side.

That instantly iconic moment has been captured on this 4′ x 6′ vinyl wall decal so you can imagine you’re cool enough to run with Owen, Blue, and the rest of the pack.

The Jurassic World Chase Mural is available for $49.99 at FatHead.

Are you sick of looking at your plain and boring wall? Well if you’re a classic NES fan, you’re going to love the Nintendo NES Zelda Wall Mural. Measuring 97″ x 32″, this mural is a huge way to pay homage to one of the […]

The Avengers: Age of Ultron Hulk vs Hulkbuster Mural

Man versus machine on The Avengers: Age of Ultron Hulk vs Hulkbuster Mural, with the men of science flexing some serious muscle. Tony Stark takes on Bruce Banner’s raging alter-ego and it looks like the city is paying the price for their little quarrel. The […]

It’s science versus science on the Hulk vs Hulkbuster Fight Poster Mural as Bruce Banner and Tony Stark face off in the fight of the century. It looks like Avengers: Age of Ultron will be a heckuva ride when it arrives on the big screen, […]

Have you felt it? The Force is strong with the Star Wars The Force Awakens Kylo Ren Mural. Maybe he’s just a Darth Vader fanboy but Kylo Ren is an intimidating figure on this 5’7″W x 4’3″H vinyl wall decal, ready to attack, his unique […]

That galaxy that’s far, far away gets a whole closer with the Star Wars The Force Awakens Rey Mural, letting you transform any wall into a scene from Jakku. Measuring 4’0″W x 6’0″H, this vinyl wall decal features Rey carrying her staff and dressed in […]

I got a chance to see those awesome Nintendo NES Zelda Wall Murals from Packmania up close and personal when he sent us a few to review and let me just say that these are the geekiest and coolest posters that you can buy. Anywhere! […]