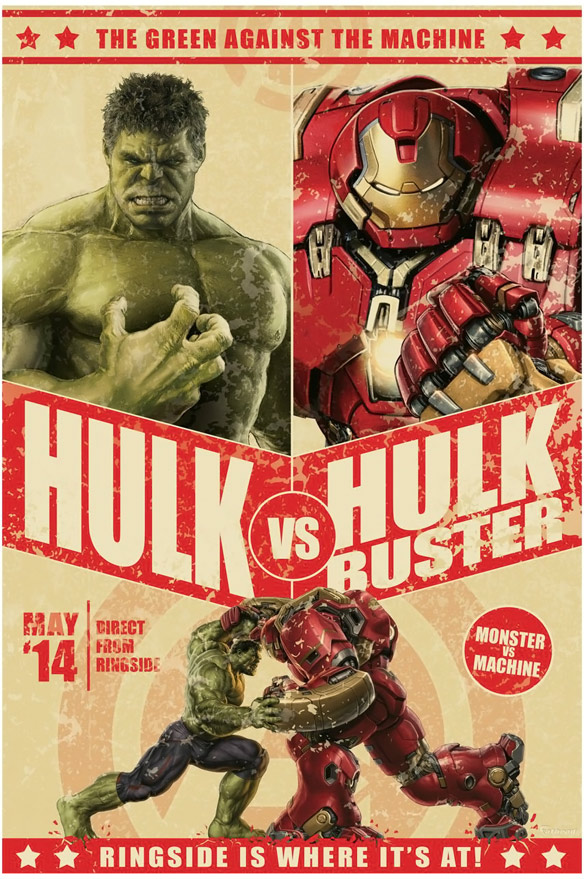 It’s science versus science on the Hulk vs Hulkbuster Fight Poster Mural as Bruce Banner and Tony Stark face off in the fight of the century.

It looks like Avengers: Age of Ultron will be a heckuva ride when it arrives on the big screen, but the moment that has a lot of people talking is the upcoming battle between Hulk and Hulkbuster. Fathead has created an awesome image commemorating the battle of titans, with a huge 6-foot by 4-foot wall decal that resembles an old, weathered boxing poster, complete with epic, attention-getting lines like ‘The Green Against The Machine.’ Poetic and still accurate; can’t beat that combination.

My only pet-peeve is the date. May ’14???? Come on, now. The movie hits theaters May 1, 2015. How hard would it have been to have the correct year? Don’t get me wrong, though. I’d still slap this on my wall faster than you can say ‘there are no strings on me.’

The Hulk vs Hulkbuster Fight Poster Mural is available for $99.99 at Fathead.

The Avengers: Age of Ultron Hulk vs Hulkbuster Mural

Man versus machine on The Avengers: Age of Ultron Hulk vs Hulkbuster Mural, with the men of science flexing some serious muscle. Tony Stark takes on Bruce Banner’s raging alter-ego and it looks like the city is paying the price for their little quarrel. The […]

Are you sick of looking at your plain and boring wall? Well if you’re a classic NES fan, you’re going to love the Nintendo NES Zelda Wall Mural. Measuring 97″ x 32″, this mural is a huge way to pay homage to one of the […]

Can we get enough of the epic battle coming in Avengers: Age of Ultron? No, we can’t, which is why we have the Hulk vs. Hulkbuster Poster. Bruce Banner versus Tony Stark. Hulk versus Iron Man… in his special Hulkbuster armor, of course, because Hulk […]

I got a chance to see those awesome Nintendo NES Zelda Wall Murals from Packmania up close and personal when he sent us a few to review and let me just say that these are the geekiest and coolest posters that you can buy. Anywhere! […]