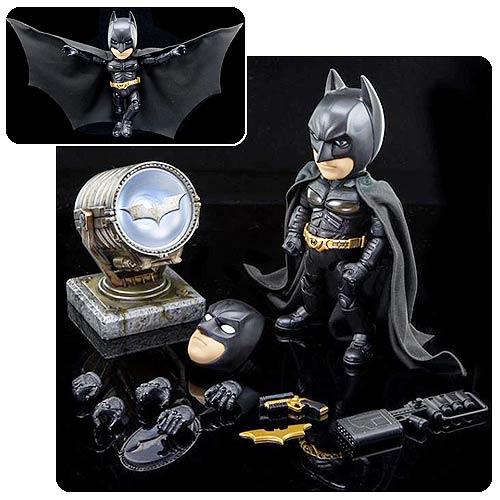 Standing 5 1/2-inches tall and based on Christian Bale’s look in The Dark Knight Rises, this action figure is ready to take on Bane and flirt with Catwoman. It’s just a typical night for the Caped Crusader.

The figure comes with a Batarang, Grapnel Gun, Electric Gun, two interchangeable faces (one with eyes and one with light up Bat-Sonar lenses), seven interchangeable hands, and a light-up Bat Signal that projects Batman’s logo.

The Batman The Dark Knight Rises Hybrid Metal Figuration Action Figure will be available October 2015 but it can be pre-ordered now for $114.99 at Entertainment Earth.

This Batman Hybrid Metal Figuration Light-Up Action Figure is pretty awesome. I love the style of these figures. The figure features die-cast metal and light-up parts and measures 5 1/2-inches tall. It includes a bunch of extras too. He comes with a light-up Bat-Signal, a […]

This Predator Hybrid Metal Figuration Die-Cast Metal Action Figure from the original Predator film has 20 points of articulation which provides great mobility and allows you to pose it anyway you want. The Predator’s mask can be removed to reveal its face beneath. The body, […]

This Superman Hybrid Metal Figuration Light-Up Action Figure is a nicely detailed and stylized action figure of the Man of Steel himself. He looks awesome and has die-cast metal and light-up components. Superman measures 5 1/2-inches tall and includes four interchangeable hands, a poseable cape, […]