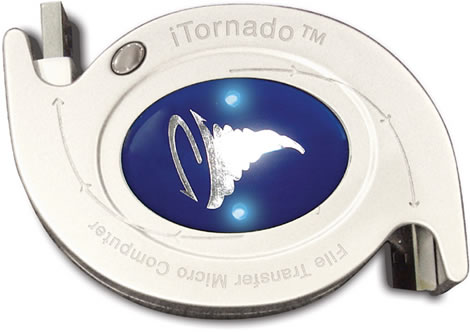 The iTornado is a clever and useful little USB device that was displayed at CES 2008 last week and at the MacWorld Expo this week.

The product combined with the included software makes it very easy to transfer files between Mac and Windows based computers.

When connected to the USB ports of two computers, iTornado immediately initiates a peer-to-peer network via its patented No Software To LoadTM, or NSTL TechnologyTM, which auto-loads and auto-runs the software and drivers needed to move the data bi-directionally from one computer to another via a user-friendly split-screen display that within seconds appears on the monitor of both machines showing the contents of each machine. From this interface, files can be dragged and dropped from one machine to another at speeds of up to 25 Mb/sec. The iTornado also can be used to quickly create back-up files and is compatible with most Apple® and Microsoft® operating system programs.

iTornado, which retails for $79.95 will start shipping in March and will be available at TheTornado.com and at computer products retailers nationwide.

Normally when we post a USB hub on GeekAlerts, it is because it has an incredibly unique look like a Skull, Airplane, Car, or Alien. That isn’t the case here. While this 12 Port USB 3.0 Hub has a sleek, compact design that you could […]

At GeekAlerts, we love USB gadgets. From USB Can Coolers and Circus Canons to USB LED Lamps and Heated Slippers, there are tons of cool USB gadgets to own. If you have a lot of these gizmos, you need the MegaHub, a 36 Port Powered […]

Flash drives have become a big part of our daily lives. Whether we are using them for school, work or play, it’s always nice to have a fast and reliable USB flash drive handy. GeekAlerts has shown you products from Verbatim in the past, and […]

In case you needed another excuse to buy Star Wars Merchandise, now you’ve got one. The Star Wars MimoMicro USB Drive & Readers make quick work of smartphone and digital camera data, allowing you to move microSD, microSDHC, and microSDXC memory cards files to your […]

With the USB Webmail Notifier with 4 Port USB 2.0 HUB, all it takes is a glance at the color of the envelope to tell how many unread email messages, instant messages, and Skypes you have waiting for you on your computer. There is no […]