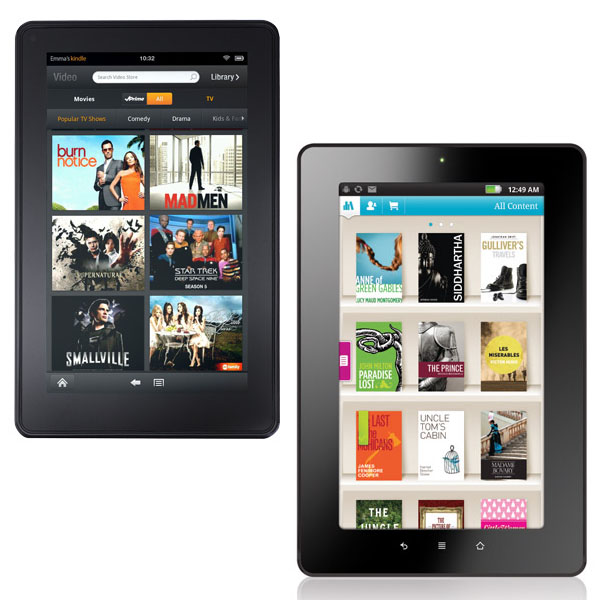 Let the tablet wars begin. Two new e-tablets are set to arrive and shake up the techy bookworm market, namely the Kobo Vox eReader and the Kindle Fire. The two Android-based touchscreen tablets have the same price point, are like fraternal twins in terms of specs, and their respective launch dates will fall within 2 weeks of each other. However, there are some discernible differences, so consumers will have to research and reflect upon what features are more intriguing to them. One thing’s for sure. With their $200 sticker price, they’re both poised to capture a healthy chunk of business from the more expensive tablet pioneers, such as Apple iPad 2, Samsung Galaxy, and HP Touchpad. 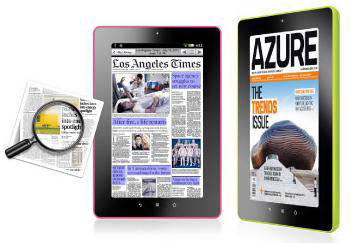 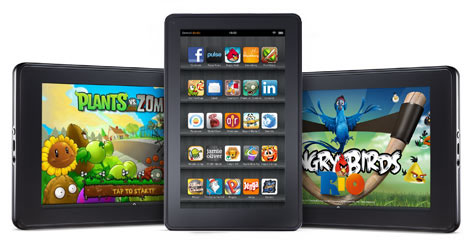 Canada is often times last when it comes to getting the latest and greatest electronics. While the Kindle Fire is set to initially launch in the US, the Kobo Vox (born in Toronto) gives Canada first dibs on the Vox, two weeks before Fire hits its U.S. release date. Meanwhile, the Vox will concurrently be released at American electronics retailers such as Fry’s and Best Buy.

In addition to the basic black, the Vox offers some contemporary colors that frame the touchscreen; hot pink, ice blue and lime green. Vox also has a nice “soft-touch, quilted” design along its back. The Fire only comes in black, but don’t worry. Like smart phones and notebooks, there will probably be a gazillion baubles and accessories out to personalize your tablet.

Kobo has taken notes on how popular social networking has become and has incorporated that culture into an online bookclub-ish feature called the Kobo Pulse. It allows the reader to access other readers’ immediate thoughts on a certain page or chapter via Facebook or Twitter. It’s clever how Kobo christened the feature the “Pulse”, because the reader can see how much action the page is getting in terms of buzz, just by looking at size and color intensity of the pulse button. The reader can click on the button to engage in the free-for-all, adding his/her own thoughts – or just choose to eavesdrop, or ignore. Pretty neat, but if you’re easily distracted like me, finishing a book will take two years as opposed to the usual one. It’s amazing how bookworms, who were once revered as an introverted species, are now finding friends in the world.

Beyond providing books to read, both tablets will help get your hands (eyes?) on the latest magazines, newspapers, movies, apps, games, music, and email. As for storage, both devices have 8GB. However, the Fire stores Amazon digital material for free in the ethereal “cloud”, therefore freeing up internal storage space. It boasts a speedy 1GHz dual-core processor, and we all have the need for speed. The Vox puts out 800 MHz. But how many pounds of torque?

Turn your Kindle Fire into an audio powerhouse with this iHome Portable Speakers for Kindle Fire. Crank it up and enjoy. This certified “Made for Kindle” accessory will act as an audio source for any device including the Amazon Kindle Fire. It has a built-in […]

Most tablet cases suffer from boring design. There’s nothing wrong with a plain leather case, but if you want something a bit more retro and old school, check out the Scholar Notebook Case for Kindle Fire HD 7″. It’s an awesome case made especially for […]

Amazon has a huge hit with the Kindle Fire and manufactures like id America are now introducing accessories for it. The Cushi Adhesive Foam Pad for Kindle Fire is the first accessory for the Kindle Fire from id America, but you’ve seen the Cushi line […]

The Sonic Vox iPhone app from Smule is a brand new audio engine that allows you to do real-time audio processing on the Apple cell phone. Sonic Vox shifts and contorts your voice while you are talking, turning the iPhone into a magical microphone of […]

The Marware MicroShell Folio is the thinnest and lightest cover designed for the Kindle Fire. It looks great because it features an advanced, ultra-low profile design and the thin, hard polycarbonate back-piece with a soft front lid helps protect both sides of your new Kindle […]

If you want to make your Kindle look more like a traditional print book, try these Classic Novel Kindle Covers. They transform your digital device into a traditional book. At least on the outside. They give your kindle some retro personality and they just plain […]

You feel all comfy and protected on your mattress at night right? So it makes sense that the case that your Kindle Fire should have a mattress-like case and be comfy and cozy too. The Kindle Fire CUSH Sleeve Case sure looks comfy for your […]

Ebooks have the power to take anywhere in time and space, just like the Doctor’s TARDIS, so the Doctor Who TARDIS Kindle Fire Leather Case makes perfect sense. The case uses sublimation technology to imprint the iconic phone box onto the front cover, with the […]

Save $120 on Amazon Kindle DX on Cyber Monday