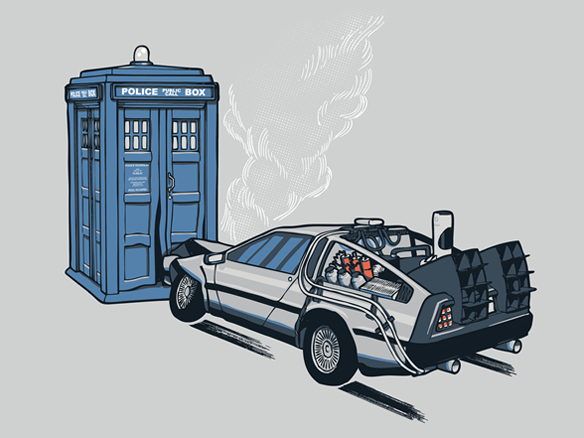 As the It Came Out Of Nowhere T-Shirt shows, it’s hard to stop in time when you’re trying to reach 88 miles per hour… and what’s with that strange blue box that appeared out of thin air?

Artist Aled Lewis created this Doctor Who and Back to the Future mash-up image featuring the TARDIS and Delorean as they both try to occupy the same space at the same time. Seems like even brilliant scientists and Time Lords haven’t figured out that trick yet. 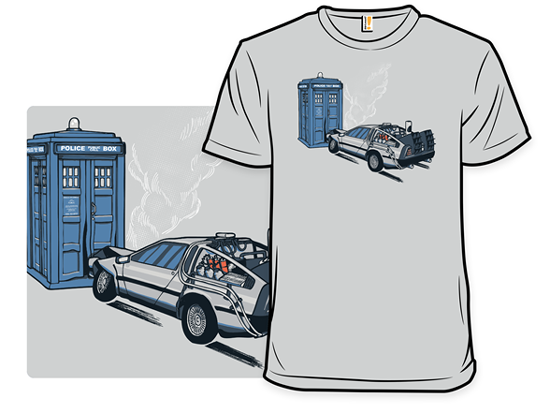 The It Came Out Of Nowhere T-Shirt is available for $15 at Shirt.Woot.

Don’t make him hungry. You wouldn’t like him when he’s hungry. The Cookies Hulk and Cookie Monster Mash-Up T-Shirt finally shows what would happen if the happy-go-lucky Sesame Street character was refused when he asks for cookies. The royal blue, 100% preshrunk ComfortSoft cotton t-shirt […]

Doctor Who Mash Up HWMF Leggings

Time and space and style collide with the Doctor Who Mash Up HWMF Leggings, and your legs will never be the same again. Wondering what HWMF means? It stands for High-Waisted Matte Finish. Yeah, I know. You were hoping for a new Whovian term to […]

Halloween can be a fun time for people of all ages and it happens to be my favorite holiday.  You get to dress up in creative costumes, hang out with friends, and get free candy.  It doesn’t get any better than that!  But parents and […]

If you’ve ever wanted to take the TARDIS for a spin, you’ll be excited to know the Doctor Who Spin Doctor TARDIS Pendant will finally give you the opportunity. Designed by the master of geek jewelry at Paul Michael Design, who has created goodies like […]

Among my siblings, my mother would always say that I was the naughtiest of all. I was also the reigning prankster among my sisters. Had I gotten this Lil Devils Trick of the Day Set, then who knows what havoc I could’ve wreaked and what […]