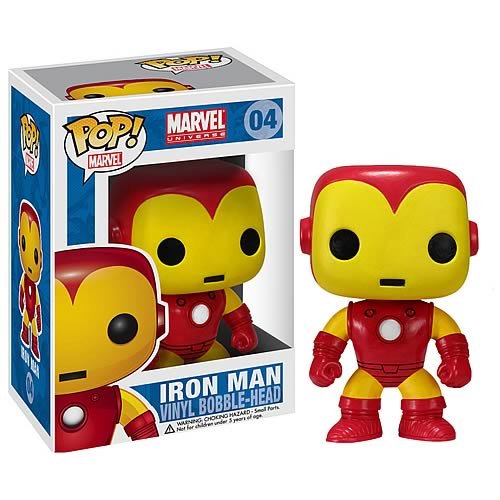 Iron Man usually looks so tough and mechanical and oh-so-serious. But the Iron Man Pop! Heroes Bobble Heads are definitely a new and more adorable take on the hero who’s got a synthetic heart pumping the life into and all throughout his body.

It might be a while before a third Iron Man movie will be released. I personally liked the first movie better than the second, so I hope they bring back some of the things that made the first movie such a huge hit in the third installment.

Until then, tide yourself over by getting one of these Iron Man Pop! Heroes Bobble Heads instead. Put them on your dashboard, on your office desk, or practically anywhere that you’d want to liven things up a bit.

Inspired by designer toys and stylized character collectibles the world over, Funko is back with Pop! Heroes Vinyl Figure!

The unique design brings Funko’s house style into the world of plastic figures, and we just know that Batman is going to look great on your desk.

This Iron Man Pop! Heroes vinyl figure is available from Amazon.com for $9.99.

You like Iron Man’s Iron Patriot? Like Pop! Vinyl figures? How about Bobble Heads? If the answer is yes, go ahead and get your money out for the Iron Man 3 Movie Iron Patriot Pop! Vinyl Bobble Head because you know you’re going to want […]

The Avengers Age of Ultron Iron Man Pop! Vinyl Bobble Head Figure is ready to rocket into action and save the day. Ultron might not like the idea of being a puppet but Iron Man has no problem with being a bobble head. Just look at […]