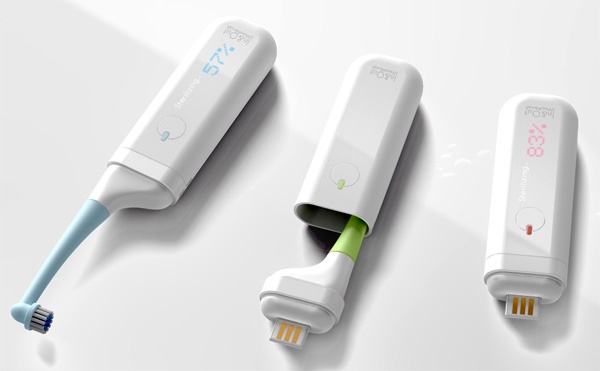 My sister purchased a UV light that’s meant to sterilize toothbrushes earlier this week, which she saw near the counter of a grocery store. That’s a pretty neat idea, considering you put your toothbrush in your mouth several times a day and it could be teeming with all sorts of bacteria and fungi that’s too small to be seen my the naked eye.

The In & Out Toothbrush concept actually builds on this and it sports a sleek, yet more complicated design. It’s not being commercially produced yet, but it looks pretty promising. 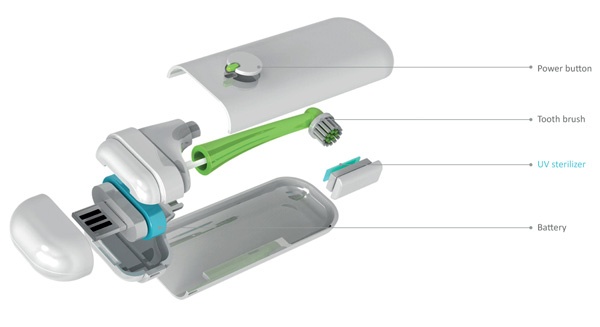 The In & Out Toothbrush concept is basically a compact electronic toothbrush that has its own built-in UV sterilizer. You don’t need to plug it into any outlets or use any batteries to power it up. Instead, all you have to do is plug it into your laptop or desktop USB port and you’re all set.

The In & Out Toothbrush is a design concept by Jaewan Jeong, Ahn Joonggeun and Hwang Sunghyun.

Brushing your teeth has never been fun, until now!  The Bobble Toothbrush Holder can take the most mundane thing and make it worth smiling about.  Designed by Spencer Sloan this weighted and rubberized toothbrush holder allows your toothbrush to wobble back and forth without hitting […]

Even Timelords need to brush their teeth. So naturally, the Doctor uses this Doctor Who TARDIS Ceramic Toothbrush Holder to hold his toothbrush. Don’t blink! But always brush! This TARDIS will geek up your bathroom counter and look great. It is a must have! Doctor […]

My sister is this huge neat and anti-germ freak. She used to change her sheets daily and have all of her towels and comforters sent off to the laundry regularly, even some that were still unused. I think she overdoes it a little (or, okay, […]

You can now save the environment while you save your teeth, thanks to the Rinser Toothbrush with Power Fountain, which combines the convenience of a water fountain with the necessity of a toothbrush. Brushing your teeth is just one of those things that needs to […]

It’s important to get kids to brush their teeth so they can be healthy and still have a full set by the time they are 30. But it isn’t easy to get them motivated. This Spider-Man Toothbrush Holder will help. It is the best place […]

This clever toothbrush can redirect water from a faucet to your lips for easy rinsing. It can also be applied to electric toothbrushes.

Humans and Timelords have one thing in common. They both have to brush their teeth to protect them from tartar and gingivitis. This Doctor Who Sonic Screwdriver Electric Toothbrush is perfect for both Timelords and fans of Doctor Who. Brush away and keep those teeth […]

Got a kid who hates brushing his teeth? Worried that he’s going to end up toothless by the ripe, young age of twenty-five? Never fear, because the Misoka Toothbrush is here.