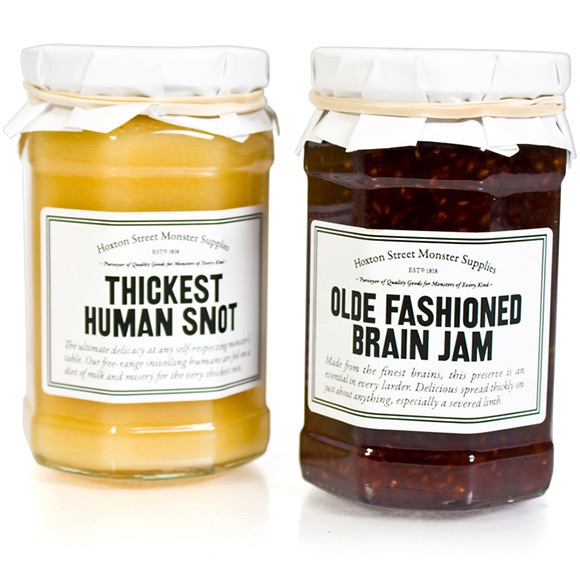 What people from some countries consider as delicacies might sound completely gross to those living somewhere else–like Insect Snacks, for instance. For the undead, the Hoxton Street Monster Supplies Human Preserves might be a huge treat but it might not be as appealing to the living, kind of like the Zombie Jerky.

Although I’m a living member of the human race, I happen to think that the Hoxton Street Monster Supplies Human Preserves are pretty darn good and delectable. Of course, you must know by now that it’s not really snot and brain matter that you’ll be putting all over your morning toast. The yellow goop is actually lemon curd, while the bloody red stuff is raspberry preserve. Yum!

Have you ever wondered what it would be like to spread brain matter and snot on your toast? We hope not, but it would be fun to have a few jars in the cupboard, even if they were not entirely real. So thank goodness for Hoxton Street Monster Supplies Human Preserves.

First up is Olde Fashioned Brain Jam (aka raspberry preserve), ‘delicious spread thickly on just about anything, especially a human limb.’ Next there’s Thickest Human Snot (aka lemon curd), ‘the ultimate delicacy at any self-respecting monster’s table.’

The Hoxton Street Monster Supplies Human Preserves are available from Firebox for £6.99 ($11.)

If you like baking and eating cookies as much as the Cookie Monster, then you’ll love this great deal on the Sesame Street Cookie Monster & Elmo Flexible Spatulas. At over 50% off, these spatulas will get you and your kids excited about baking mom […]

Laptop keyboards can inadvertently be the perfect personal heater for your fingertips and wrists. My laptop nearly gives me first-degree burns. While this warmth comes in handy, the rest of the hand gets the “cold shoulder.” That’s why we like the USB Toast Hand Warmers, to give cold hands the TLC they deserve. With the life changing Wi-Fi revolution going on, we’re all starting […]

How many toast-inspired objects have you seen out there? The GeekAlerts staff definitely knows a thing or two about getting toasted. For starters, we’ve given you a glimpse of Toasted Notes, a Toast Air Freshener, a Toast Wallet, USB Toast Hand Warmer, Mr. Toast Plush, Toast Playing Cards, and […]

If there’s ever a piece of toast that looks jaded, it would be Mr. Toast in his plush version. The Mr. Toast Plush Toy looks like a regular piece of toast with some eyes, a straight mouth, and a pair of hands and feet that’s […]

Fans of portal 2 will recognize the grenade on this mug. The Portal 2 Lemon Grenade Mug is a great way to drink any beverage. It may look like it is just made for lemonade, but you can use it for any beverage. This lemon […]

Maybe I’m just geeky, but toast makes for some really cool designs, as demonstrated by these Toast Playing Cards. They are the latest bread themed fun along the lines of the Toast Drink Coasters, Sandwich Lunchbox, and all the Cool Toasters. Each card in this […]

I love the smell of fresh toast in the mornings. It just reminds me of those morning where I used to just grab one on the go out of the toaster because I was already late for school. Things haven’t really changed, except now I’m […]

I think most of us grew up watching Sesame Street, I think some of my coworkers still do, and now we can show our love for these inspirational educators.  With Elmo, Oscar the Grouch, Grover, and Cookie Monster to choose from, these Sesame Street Knit […]