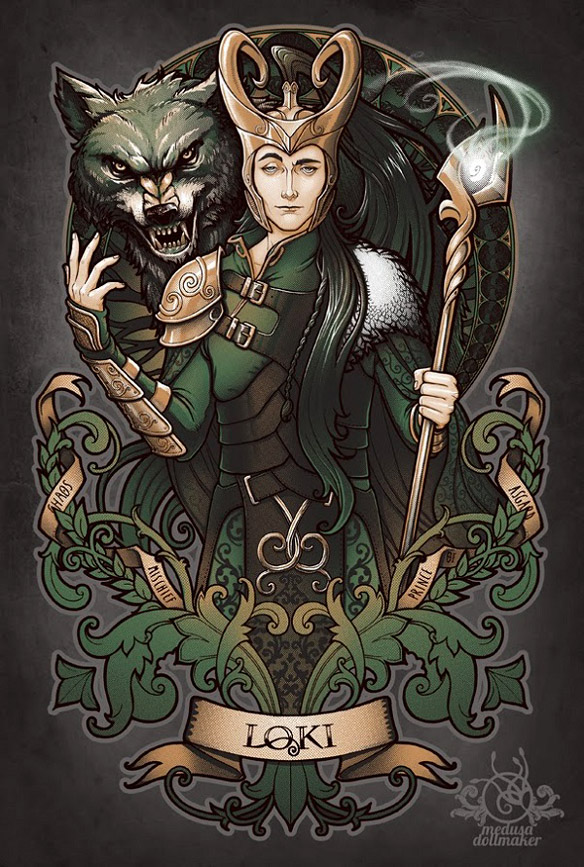 Mythology meets comic books meet movies on the House of Loki Sons of Mischief T-Shirt. New fans of the trickster god might not realize it but Loki used to really suffer in the looks department. However, all that changed when the world began to see Tom Hiddleston as the Norse God of Mischief, which is probably why this artistic depiction of Thor’s stepbrother looks more like his modern self than the old-school Loki.

As is usually the case, Loki has to share the spotlight but I don’t think he minds this time since he’s sharing it with his son, Fenrir. Yeah, Loki has a wolf for a son. It’s probably wise not to mention any family resemblances. 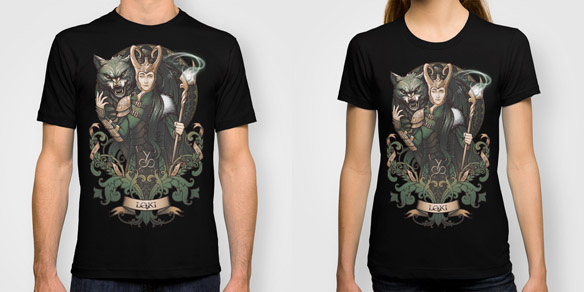 The shirt is available for both men and women, and the image can also be ordered on tank tops, iPad cases, iPhone skins, and various other items.

The House of Loki Sons of Mischief T-Shirt is available for $22 at Medusa Dollmaker’s Society 6 store.

In the comics, the Asgardian god of mischief has become the god of stories, but the Marvel Loki Velvet Embossed Dress proves that he’s also the god of style. Loki has transformed himself into a woman before, and he’d probably do it again just to […]

Be as slick and subtle as the Norse God of Mischief with the Loki Burdened with Glorious Purpose T-Shirt, and find out if those around you share your geeky interests. Just take a look at this 50/50 cotton-poly blended raglan baseball t-shirt. If a person […]

For those times when you can’t decide if you want to wear a cape or a blazer, the Marvel Loki Cape Blazer will let you wear both. Loki might be the god of mischief, and he might occasionally do things like steal the throne from […]

The god of mischief doesn’t let things like honor or duty stand in his way, and you have to admire that… by wearing the Marvel Loki Tank Top. Thor does the hero thing, Hulk smashes, and Loki… well, Loki’s plans change from moment to moment. […]