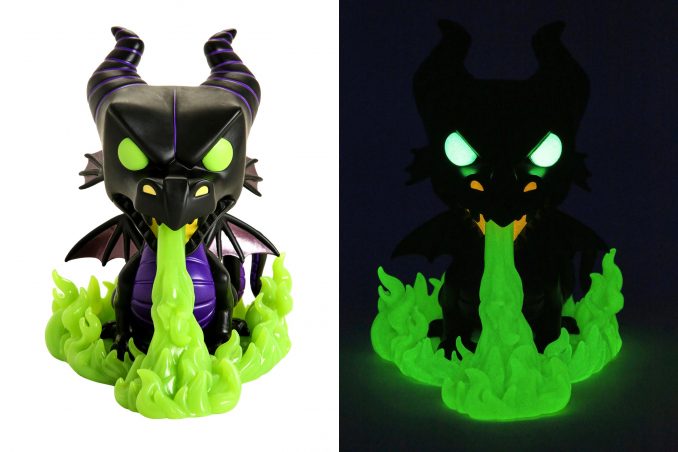 This exclusive Funko Pop! Disney Villains Glow-in-the-Dark Maleficent Dragon is perfect for collectors. It is set apart from other Funko vinyl figures in that it is glow-in-the-dark, at 6″ tall it is much larger than regular pops, and it is a BoxLunch exclusive.

Designed to look like a stylized version of Maleficent as the Dragon, this figure is Funko Pop! Disney Villains #720.

Now shall you deal with ME, o prince, and all the powers of hell!

If you can’t defeat Maleficent, join the forces of evil and add her to your shelf! Reimagined as our exclusive 6″ Pop! figure, the Mistress of all Evil is depicted in the form of her wicked black and purple dragon guise. Poor simple fools will fear the glow-in-the-dark facial features and base of surrounding green flames!

This Funko Pop! Disney Villains Maleficent as the Dragon Glow-in-the-Dark 6″ Vinyl Figure is available exclusively at BoxLunch, where it costs $28.90.

If Elvira is your favorite horror hostess, memorialize her with this exclusive Funko Pop! Elvira Mistress Of The Dark Deluxe Figure. It features the cleavage-baring Elvira reclining on her iconic red Victorian couch. Elvira, Mistress of the Dark, is the character first played by Cassandra […]

Inspired by the Live Action Dumbo Movie that is currently in theaters, these Funko Pop! Disney Dumbo Figures are as cute as can be. There are three different versions of these adorable vinyl figures: one where the flying elephant is wearing a fireman’s hat and […]