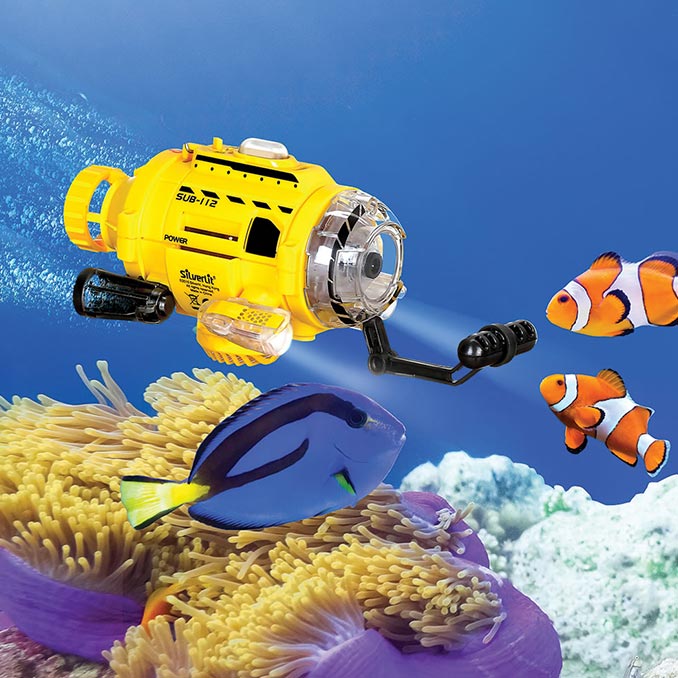 Wouldn’t it be fun to feed and record fish with this Fish Feeding RC SpyCam Submarine? This Silverlit SpyCam Aqua is a remote control submarine that has a built-in food hopper for feeding fish. The fish come to feed, and you can record them to video or still pictures with the built-in camera. Use the remote control to dive, climb, move forward, backward, left, or right, or activate the two LED spotlights.

This is the remote controlled submarine that captures images and videos of fish while they are feeding from its built-in food hopper. The sub floats, dives, climbs, and moves forward/backward/left/right from an infrared remote that also activates the sub’s twin LED spotlights. The detatchable hopper extends from the front, enabling the sub’s built-in camera to capture 1280 x 960 still images and 640 x 480 video; footage is stored on integrated 256 MB memory.

Extending your photo shooting fun to the water! SpyCam Aqua is a 3 channel submarine able to submerse to your fish tank shooting video / photos from a whole new angle. Complete water proof with built-in 256mb memory makes your photography tour ready to run!

The Fish Feeding Submarine is $69.95 at Hammacher Schlemmer.

There’s a whole world under the waves and you can get a good look at it with the Submarine Camcorder and your iPad. You might not be able to fit inside this tiny little sub but that’s not a problem because you’ll feel like you’re […]

It’s spy gadget time again. Last week we had the Bluetooth Headset Spycam with LCD Display, this week we’ll take a look at a spy camera hidden inside an ID card.

This Zippo style lighter hides a spy camera that is capable of capturing video in a 640 x 480 pixel resolution at 16 FPS and store it as an AVI file on the 2GB large built-in memory.