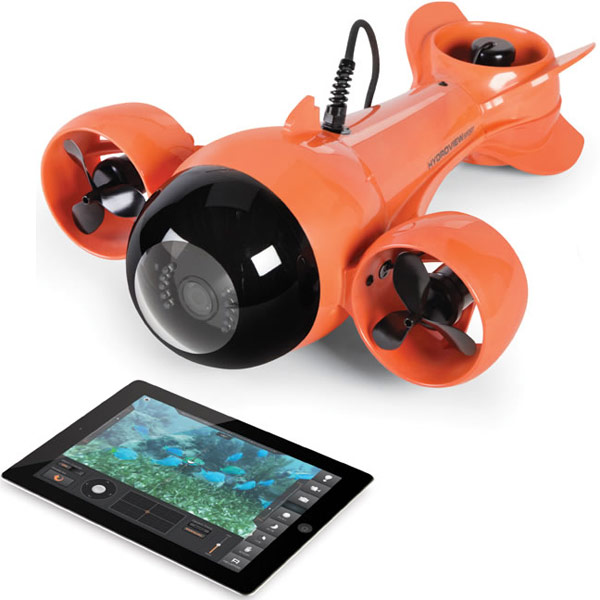 There’s a whole world under the waves and you can get a good look at it with the Submarine Camcorder and your iPad. You might not be able to fit inside this tiny little sub but that’s not a problem because you’ll feel like you’re actually in the underwater world, thanks to the video feed and motion controls that are at your fingertips.

The little submarine can dive down to 100-feet below the water’s surface, with a video cable tether sending live video directly to your iPad or laptop through its receiver, and you don’t have to worry about missing something the first time around because the video is also stored on the camcorder’s built-in 32GB memory. Still images are stored directly onto your iPad or laptop.

The sub can be guided with a virtual dashboard on your tablet that lets you control electric thrust and lift propellers for forward/backward, left/right, and up/down movement. The iPad’s motion sensors can also be used to steer the sub.

In addition to providing video and still images, sensors on the sub also provide depth, heading, battery level, and temperature data. You can even use a built-in timer to let the camera take pictures at regular intervals while you focus on other things.

The Submarine Camcorder is available for $6,300 at Hammacher Schlemmer.

GeekAlerts first introduced you to Looxcie last year with the Looxcie LX1 Bluetooth Camcorder. Now we want to share the new and improved Looxcie 2 Wear-and-Share Instant Streaming Video Camcorder with our readers. With features like video looping, video recording and live video streaming, this […]

Often with spy gadgets, they are quite bulky and not at all very innocent looking. But with these glasses, the manufacturer has done quite a good job hiding the camcorder.