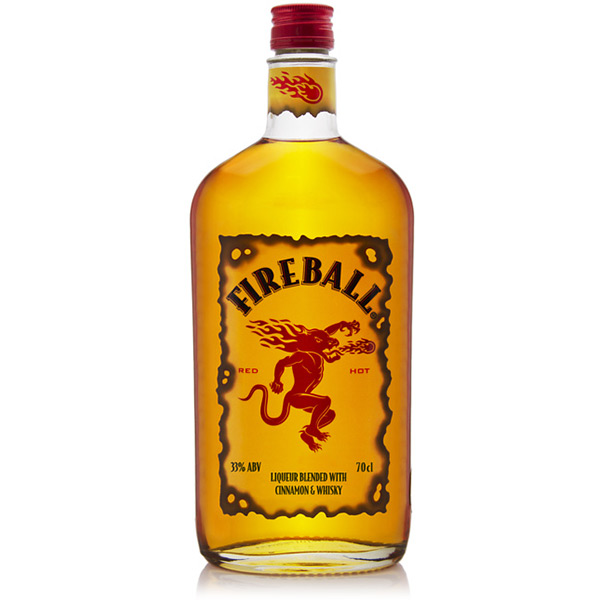 If you’ve been following GeekAlerts for a while, you’ve had the opportunity to build a really awesome liquor collection featuring unique flavors, cool names, and impressive designs/bottles. Drinks at your house won’t be ordinary if you have Bacon Flavored Vodka, Black Chocolate Liquor, Scorpion Vodka, and Coffee Liquor. Another great addition to your home bar is Fireball Cinnamon Whisky, a combination of smooth whiskey with red hot cinnamon flavor.

Fill a flask with Fireball, and you have a secret elixir to warm you up when you’re out in the cold. Drink it straight, on the rocks, or mix it in to make drink with a kick. Fireball Cinnamon Whisky is 33% alcohol by volume.

This golden slurping whiskey is deliciously smooth with one fiery cinnamon kick. Well suited to hip-flasks and hipster cocktails, this tongue-tingling tipple is as versatile as it is delicious. Temper its heat by pouring it over ice, or enjoy it as a long drink with apple juice, ginger ale, cranberry juice or cola. With sweet notes for summer sipping and that cinnamon kick for winter warming, this all-season sizzler makes a handy addition to any bar.

Merchants call these Whiskey Stones, but there isn’t a drop of whiskey in them. They are simply a great way of keeping your drink (such as whiskey) cold without watering it down. They are made of stone though, being handcrafted in the USA from a […]

Are you still searching for that perfect Father’s Day gift? Or maybe you’re just looking to add to your fine collection of specialty alcohols? Either way, this Valhalla Collection Thor Whisky needs to be on your list. From Highland Park, this single malt scotch whiskey […]

Age Your Own Woodinville Whiskey Kit

GeekAlerts has shown you the DIY Hoch kit, The Beer Machine, and the Drinks-Lab Homebrew Kit, but now it’s time to take a look at something for a slightly more advanced palate. The Age Your Own Woodinville Whiskey Kit comes with everything you need to […]