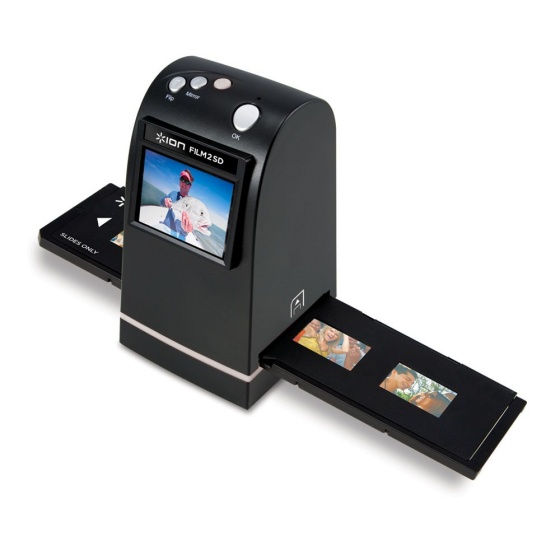 I recently stumbled upon an old family photo album, which had a paper enveloped tucked inside that was stuffed with old film negatives. I thought of having most of it re-developed at the photo shop but after doing a final count on the number of shots I had (over two hundred), I changed my mind. I wanted a way to scan and view the images without just guessing what was on the film by holding it up against the light, which is why I was ecstatic when I heard about the Film 2 SD Neg Scanner.

The Film 2 SD Neg Scanner takes your slides and film negatives, scans them, and saves a high-quality image of what’s on the film. So instead of having the film developed, you can just scan it and print it of on photo paper with your regular printer. Cool, huh?

Rediscover your long-lost 35mm slides and film negatives with the Film 2 SD. This high-quality scanner transfers your images directly onto an SD card so you can enjoy your old pictures with the latest technology. Thanks to Film 2 SD’s large, full-color LCD screen, you don’t even need a computer to make it work!

With all of your pictures on an SD card, you can view them on digital picture frames, televisions, mobile phones, computers, and other portable devices. Imagine all of your memories with you at home or anywhere you go!

Digital photography has forever changed the ways photographs are taken and stored, but what do you do with all those pictures taken BD (Before Digital)? The iPICS2GO Negative to iPhone Scanner lets you bring all those old photos, slides, and negatives into the 21st century […]

Portable scanners aren’t exactly anything new. There was the USB Mini Scanner that lets you scan small-sized cards and documents on the go; while the Copycat Scanner lets you scan high-resolution images of larger documents. The cool thing about the latter device was that you could […]

Just when I thought scanners couldn’t possibly get even more portable or smaller than the Copycat Scanner, out comes the USB Mini Scanner. While you obviously won’t be able to do full-page scans with this teeny, tiny device, you can scan equally teeny, tiny stuff […]

Have you ever needed to scan documents or photos while you were on the go? It sucks having to take pictures of papers and other materials that you need a copy of when you don’t have access to a desktop scanner or photocopying machine wherever […]

It seems as if the World’s Only Portable Full-Page Scanner with Preview no longer is the only one of its kind, because this new scanner from Ion looks a lot alike.

The iPad may be a tablet computer, but that doesn’t mean it can’t have all of the same peripherals as your PC. The DOCS2GO Scanner for iPad is a handy scanner to use with Apple’s tablet, yet again making this tablet a powerful tool. This […]

This is said to be the world’s only portable full-page scanner with the capability of providing a preview of the document on its 2.4-inch color LCD screen before saving it as a digital file.

The FIXD: Active Car Health Monitor & OBDII Scanner reads your Check Engine light and tells you exactly what the problem is as well as how severe it is. Because most of us are not mechanics and have no idea why that light comes on. […]

It wasn’t too long ago that digital cameras didn’t exist and we all used film for our photos. Thankfully, after many bad pictures and tons of over exposed rolls of film, we’ve progressed to a much more practical technology. For those of us that that […]

Are you old enough to remember Polaroid Cameras? At one time it was the only way we could get instant photos. Kids today are so spoiled. Well, many of you probably still have the cameras, but finding film for them is tricky. Not anymore. Impossible […]

This handy voice recorder will enhance your physical photo albums with audio tags.