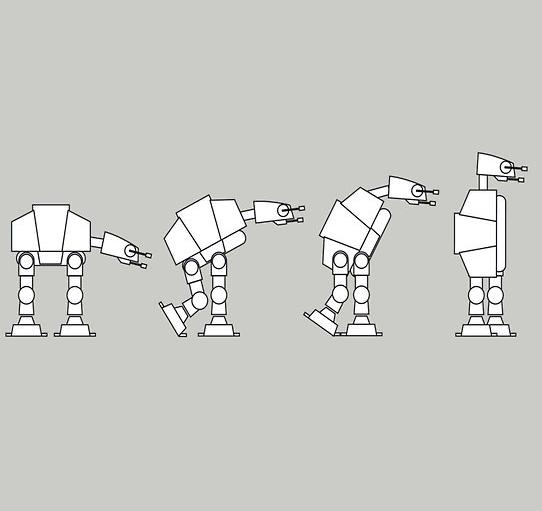 GeekAlerts has shown you a ton of cool t-shirts and hoodies, and this Evolution of the AT-AT T-Shirt designed by James Lillis should go nicely with any Star Wars fan’s collection. James uses a creative approach to show Darwin’s Theory of Evolution. If any Star Wars machine is in need of an update, it is the AT-AT…all show and not much go!

Ever wondered what the AT- AT will look like in several million years? Me neither. However, just in case, I have done a detailed evolutionary biological projection of what the AT- AT’s future looks like. Behold, the upright AT- AT.

RedBubble has the Evolution of the AT-AT T-Shirt in several different colors and cuts. Choose from girly fit, v-neck, regular tee, or even go with it on a hoodie. You can pick it up in sizes small- XXXL with prices starting at $25.56.

We’ve all been taught the theory of evolution in our Science classes when we were in elementary school. The fact that humans evolved from apes is one that is well-known and well-propagated, from t-shirt designs to toys like the Evolving Darwin Play Set to movie […]

This Bulbasaur Evolution Short Sleeve Button-Up Shirt looks amazing. It is a black rayon shirt with cyan Bulbasaurs, Ivysaurs, and Venusaurs. Pokemon fans fans have found their new favorite shirt in this officially-licensed Pokémon shirt. Thisone is for trainers with style. This is an awesome […]

This Pikachu Evolution Short Sleeve Button-Up Shirt is perfect. We all know that Pikachu is the best Pokemon anyway. Now he is on a shirt that is stylish and awesome. This black rayon shirt has yellow Pichus, Pikachus, and Raichus. You wear this and everyone […]

If you’re a gamer or you know someone that is, the Evolution of Gamers T-Shirt could be the perfect gift. Taking a note from Darwin, Mike Jacobsen designed this funny t-shirt showing how gamers started out as apes and ended up as basically apes with […]

The Evolution of Batman Films Poster Print provides a cartoon-style look at how the Dark Knight has changed throughout the years during his adventures on the big screen. Created by artist Jeff Victor and measuring 18-inches by 24-inches, this limited edition poster follows the evolution […]