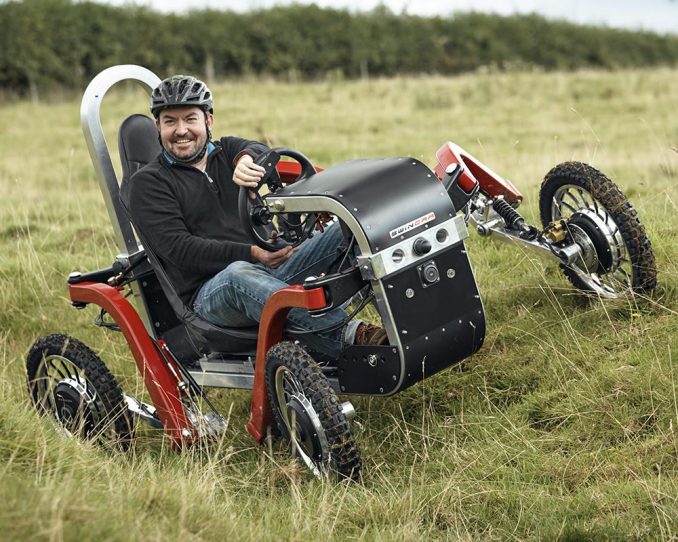 This Electric All Terrain Pendular Quadricycle is a very unique vehicle that you can race over everything from grassy hills and dirt embankments to fields of snow and rutted trails. It looks like it would be so much fun to drive, somewhat like a jet ski, where it’s hard to stop smiling while you’re riding.

Featuring an innovative design with a driver’s nacelle, this electric off-road vehicle can easily negotiate uneven terrain and steep slopes, while giving the driver precise control. Since it’s electric, maintenance should be trouble-free. All around it seems like one amazing vehicle with just one problem, the price.

This is the electric vehicle that moves over tough, off-road terrain using four wheels that articulate on longitudinal axes in concert with the driver’s nacelle. Designed and manufactured in southern France, the craft’s patented pendular movement is a product of placing the nacelle’s center of gravity below its pivot axis and placing the pivot axis of each wheel below its contact point with the ground. This imparts an independent pendular effect to the nacelle and wheels, which allows the craft to negotiate uneven terrain—each wheel negotiates slope differences independently—while the driver’s nacelle tilts with the wheels when cornering or traversing a slope. All four wheels steer, which grants the driver positive, direct feedback—this yields a high degree of precise control over grassy hills, dirt embankments, fields of snow, deep-rutted dirt tracks, and more.

This Electric All Terrain Pendular Quadricycle  can be yours if you have an extra $15,000 laying around. Buy it at Hammacher Schlemmer.

If you live in an urban area where space is at a premium, want to seriously reduce your environmental impact, or you’re a hipster that wants to trade in your vintage Vespa for something ulta-modern, you’ll want to look at the new BOXX Electric Scooter. […]

At first, electric vehicles were things we’d only associate with kids. Then came a wave of electric and hybrid vehicles for grown-ups. Though they haven’t gone mainstream yet, they’re definitely inching their way towards cooldom. Fisker Karma, anyone? Electric bikes are being swept up on the same jetstream. It’s good because gas […]

Remote control toys are fun. RC toys that are all-terrain, transform fro tank to robot, and fire missiles like this Air Hogs Robo Trax Transforming All-Terrain Tank are insane! With its all-terrain tracks, AirHogs RoboTrax can drive over rugged surfaces including rocks, gravel, sand, and […]

I was never really good at solving Rubik’s Cubes. If it was a good day, then I’d probably be able to finish the cube in around ten minutes. If it wasn’t, then let’s just say I save it for another day. For this reason, I […]

Are you a tough guy; or just someone who wants to maintain that sort of image? Do you want to smell like you’ve been out rolling in the yard or at your workshop all day? If so, then a few spritzes of the Dirt Cologne […]