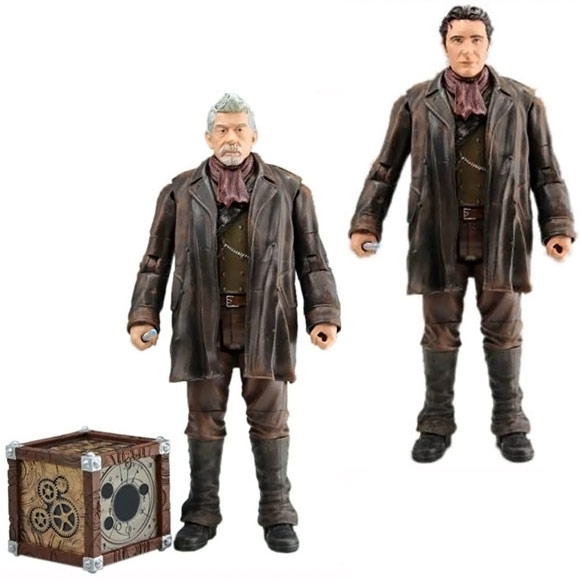 The Doctor who took action when nobody could get it right becomes something you can hold in your hands with the Doctor Who: The Other Doctor Day Of The Doctor Action Figure… and this figure has a secret that will thrill fans of the Doctor who came before.

This battle-worn Doctor, which looks suspiciously like John Hurt, is dressed in the same style of clothes worn in “The Day of the Doctor,” with his trusty sonic screwdriver included, too. But that’s not all because the sentient weapon known as The Moment is also along for the ride, although the awesome-factor would be quadrupled if The Moment was in Bad Wolf Rose form instead of box form.

While there’s no Bad Wolf, there is an extra accessory that will thrill fans of Paul McGann’s Time Lord incarnation because an Eighth Doctor alternate head is provided, allowing for adventures with either 8 or 8.5 (I refuse to call him 9 because that just throws the numbering system completely out of whack).

The Doctor Who The Other Doctor Day Of The Doctor Action Figure will be available February 28, 2014 but it can be pre-ordered now for £14.99/$24.50 at ForbiddenPlanet.com.

Paul McGann takes control of the TARDIS once again as the Doctor Who Eighth Doctor Sixth-Scale Figure. In the long line of Doctors that have come before and after the Eighth Doctor, McGann’s incarnation truly gets the short end of the sonic screwdriver, remembered mostly […]

Fairy tales and science fiction collide on the Doctor Who Red Riding Hood Bad Wolf T-Shirt, with the little girl headed to grandma’s house encountering a completely different type of bad wolf. It looks like someone has desecrated the TARDIS with a little graffiti, but […]

Doctor Who Night of the Doctor 8th Doctor Action Figure

Doctor Who ‘Time of the Doctor’ Action Figure Set