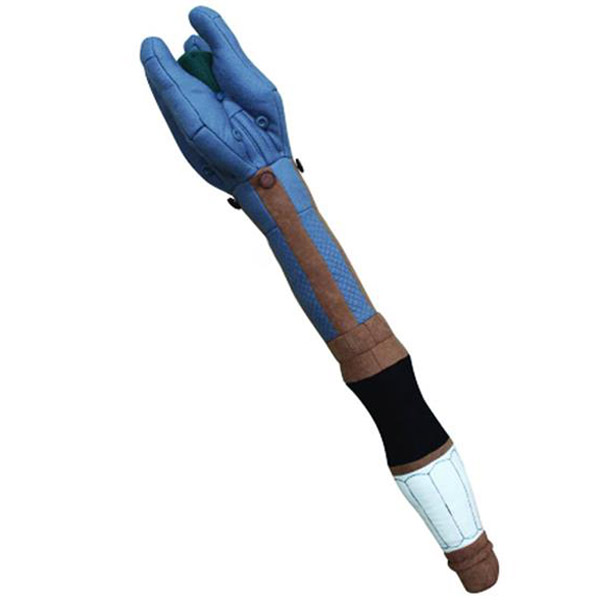 Getting a little chilly as that icy breeze slips under your door? It might not be living snow but you still want to stay warm so keep out the cold with the Doctor Who Sonic Screwdriver Draft Blocker… or Draught Blocker as our UK friends like to say.

This 4.20-pound sonic screwdriver won’t fit in your pocket but it will fit most doors, and it would probably do double-duty as a nice, snuggly pillow during those times when there’s no draft to block. Admit it. You’re totally going to cuddle this thing when nobody’s looking.

You probably won’t get much use out of it this winter because it won’t be available until March 2014 but you can pre-order the Doctor Who Sonic Screwdriver Draft Blocker now for $44.99 at BigBadToyStore.com so you’ll be ready for next winter… and any other time you get the urge to cuddle an over-sized sonic screwdriver.

The sonic screwdriver can be used for many things. It’s almost a magic wand the way the Doctor uses it sometimes, Well, now this Doctor Who Sonic Screwdriver Draft Blocker will block drafts too. Shove this giant sonic screwdriver under your door and you won’t […]

Do you find it annoying when iTunes pops up every time you plug in your iPhone, iPod, or iPad? You could tweak your iTunes settings so that it won’t pop up automatically when you plug in your device, or you could just get the Tune […]

In today’s vernacular, being a cock blocker is not cool, but the Cock Blocker Bottle Stopper puts the term in a whole different light. This cock will block the bottle opening and keep your beverages fresh. Hence the name. The Cock Blocker Stopper. Try saying […]