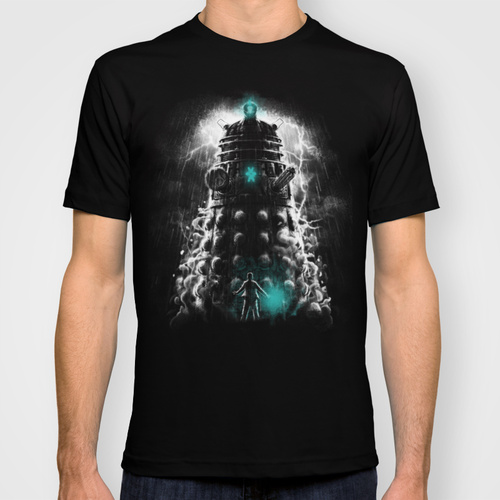 The Doctor has a BIG problem on the Doctor Who Shadow Of The Dalek T-Shirt as he comes face-to-face (sort of) with the biggest of the bad there is.

Judging from the intense scene on this American Apparel 100% fine jersey cotton t-shirt, the Dalek could destroy the Doctor without even realizing it, but the tiny glow emanating from the Time Lord’s hand suggests he has his trusty sonic screwdriver ready for action, and that usually means things aren’t as bad for the Doctor as they initially appear.

The Doctor Who Shadow Of The Dalek T-Shirt is available for $22 at Fuacka’s Society 6 store, and if you happen to feel that you have enough Doctor Who t-shirts, you can also get the image on tank tops, throw pillows, tote bags, iPhone cases, and various other items.

Exterminate boring clothes with the Doctor Who Dalek Touchdown Shirt, because the Doctor is the only person who wouldn’t like a stylish shirt filled with Daleks. The Doctor always stops the Daleks when they try to take over the world but he has no problem […]

If you’re trying to exterminate this cold winter weather, throw on the Dalek Doctor Who Beanie. Designed to make your dome look like a Dalek, this beanie will help keep you warm with some serious Doctor Who style. This officially BBC licensed Dalek Beanie is […]