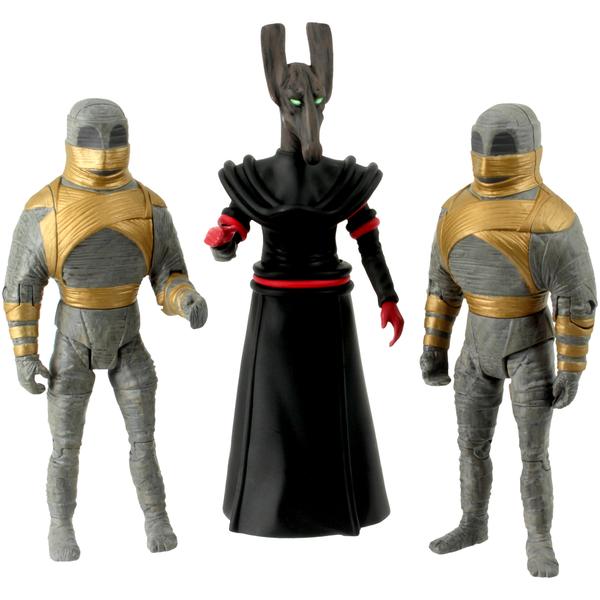 Fans of classic Doctor Who are going to love this Doctor Who Pyramids of Mars Action Figure Set from the classic episode of the same name.

These figures have some nice detail and the episode is a fan favorite. You get Sutekh with jackal head and 2 Mars Guardian Robot Mummy action figures. Here’s a bit of trivia for Who fans. This episode featured Rolling Stones singer Mick Jagger’s house in some of the scenes.

This awesome pre-order set is just £19.99 from Forbidden Planet. It makes a great gift for any Doctor Who fan.

Mars Attacks was an instant classic. It was funny and had some awesome aliens invading our planet. Now you can experience these menacing aliens in more of a 2D version with this Mars Attacks! Movie Blox Vinyl Figure. He’s flattened and made extra cute, rather […]

Get closer to the red planet than ever before with this Mars Spinning Globe on your desk. This fun globe measures 4 1/2″ in diameter and makes space exploration easy. The rotation is powered by low-light solar cells. You will find it mesmerizing. Who needs […]

The Terraforming Mars Board Game lets you play as corporations cooperating & competing to terraform Mars. You’ll have to manage resources, build projects, and collect victory points to win. This game will be hours of fun for 1-5 players aged 12 and up. Terraforming Mars […]

I love Mars attacks stuff and this Mars Attacks! Martian Figure Model Kit is an exciting collectible. What a great way to celebrate the 50th anniversary of the Topps Mars Attacks! Trading Cards! This model kit features an attacking Martian with a street-scene base and […]

These Mars Attacks Close Up Leggings probably won’t blow up Congress but they will give you some out-of-this-world fashion street cred. Inspired by the 1996 film that seemed to star just about every familiar face in Hollywood at the time, these colorful leggings feature close-up […]

This Mars Attacks Pint Glass 2-Pack is perfect for fans of the movie/card set. You’ll want to make Martian noises are you are sipping an ice cold drink. If the Martians are really invading Earth, you might as well enjoy one last cool drink. These […]

The Martians are invading. Take up arms with this Mars Attacks Dice Game and hit them back hard. Uh. Sorry, but in this game you will play as the Martians and try your best to destroy the humans. Conquer Earth in this fast-playing tactical dice […]