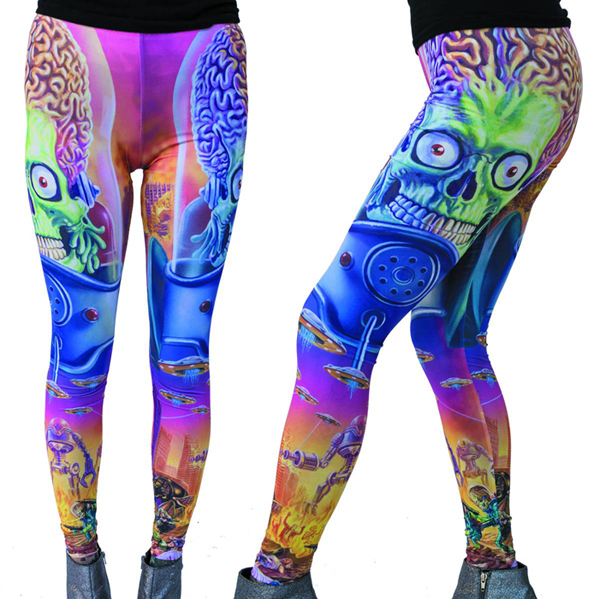 These Mars Attacks Close Up Leggings probably won’t blow up Congress but they will give you some out-of-this-world fashion street cred.

Inspired by the 1996 film that seemed to star just about every familiar face in Hollywood at the time, these colorful leggings feature close-up views of two Martians, along with a few scenes of death and destruction… because no wardrobe is complete without those elements, right?

In the words of the Martian Ambassador, “Ack! Ack Ack! Ack!,” which means “You’ll love these clothes.” Or maybe it means “I’ll wear you as clothes.” These Martian Translator Devices can be a little tricky.

The Mars Attacks Close Up Leggings will be available September 2014 but they can be pre-ordered now for $32.99 at Urban Collector.

I love Mars attacks stuff and this Mars Attacks! Martian Figure Model Kit is an exciting collectible. What a great way to celebrate the 50th anniversary of the Topps Mars Attacks! Trading Cards! This model kit features an attacking Martian with a street-scene base and […]

The Martians are attacking. So keep your money and cards safe in this Mars Attacks Martian Bi-Fold Wallet. They probably won’t disintegrate it since it bears their image. This awesome wallet features multiple card slots, a transparent I.D. slot, and a large pocket for cash. […]

Mars Attacks was an instant classic. It was funny and had some awesome aliens invading our planet. Now you can experience these menacing aliens in more of a 2D version with this Mars Attacks! Movie Blox Vinyl Figure. He’s flattened and made extra cute, rather […]

This Mars Attacks Pint Glass 2-Pack is perfect for fans of the movie/card set. You’ll want to make Martian noises are you are sipping an ice cold drink. If the Martians are really invading Earth, you might as well enjoy one last cool drink. These […]

There are many cool aliens from Sci-Fi movies, but few are as cool and funny (in a creepy way) as the Mar Attacks aliens from Tim Burton. They are one of my favorites. If you feel the same way, you might want to get this […]

The Martians are invading. Take up arms with this Mars Attacks Dice Game and hit them back hard. Uh. Sorry, but in this game you will play as the Martians and try your best to destroy the humans. Conquer Earth in this fast-playing tactical dice […]