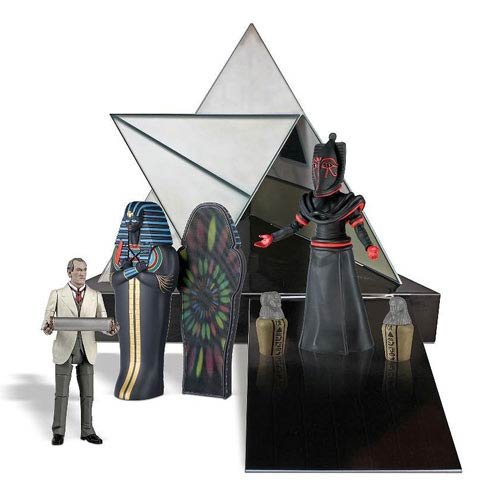 So nice that playing with it is like watching the show. This playset is only $54.99 from Entertainment Earth and $59.52 at Amazon.com.

Fans of classic Doctor Who are going to love this Doctor Who Pyramids of Mars Action Figure Set from the classic episode of the same name. These figures have some nice detail and the episode is a fan favorite. You get Sutekh with jackal head […]

When the Jedi pass away, they fade away, becoming one with the Force. Humans require a little more effort, and these Star Wars Urns will insure that everyone knows you are, and will forever be, a fan of that galaxy that existed a long time […]

Doctor Who TARDIS with 5-Inch Figure and Mini-Figure Playset

What could be better than having your own TARDIS playset? I would have loved this Doctor Who TARDIS with 5-Inch Figure and Mini-Figure Playset when I was a kid. Maybe it isn’t too late for me to play with this. This awesome playset includes a […]

This True Genius Pyramid & Hieroglyph is ancient Egyptian symbols in puzzle form. It is made of solid wood and heavy metal. Maybe you’ll learn how they created the pyramids. Was it aliens? It includes the Pyramid and Hieroglyph. This will be challenging so you […]

Science fiction takes a spooky turn with the Doctor Who Hide Caliburn House Playset, based on the episode, ‘Hide,’ that features Matt Smith as the Doctor and Jenna Louise Coleman as Clara. We eventually learned the truth behind the ‘ghosts’ of Caliburn House but wasn’t […]

If you missed this seasons Cold War episode of Doctor Who, go watch it. Then buy this awesome Doctor Who Time Zone Playset 2: Cold War 1983. This 3D card diorama playset feature the time zone of 1983, when the Doctor visited it in the […]

Don’t blink because it’s time to exterminate boredom with the LEGO Ideas Doctor Who Playset. Get ready for some exciting adventures in time and space with the Eleventh Doctor, the Twelfth Doctor, and Clara Oswald as they face Daleks and a Weeping Angel. The set […]

If you take the classic Rubik’s Cube mechanical puzzle and change it into the shape of a pyramid, you might end up with this 360 Brain Twist Puzzle.