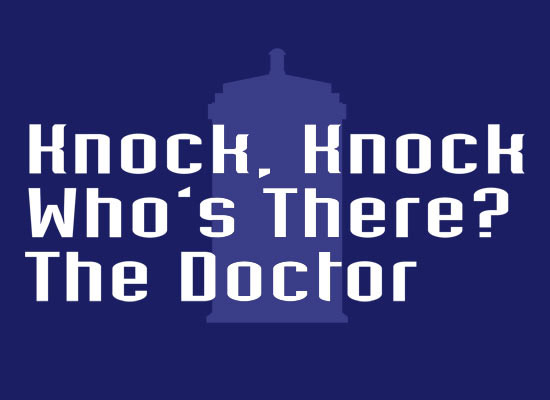 One man in all of space and time is the perfect subject for knock-knock jokes, and the Doctor Who Knock Knock! Who’s There? The Doctor T-Shirt lets even non-Whovians in on the fun.

I suppose it’s possible that someone somewhere on the planet hasn’t heard of Doctor Who and they would just give you a blank look but everyone else will get a little laugh and a knowing smile out of the ultimate knock-knock joke. Who’s there? Doctor Who, of course. However, one would have to wonder why the Doctor didn’t just land the TARDIS inside the place he wanted to enter, but then there wouldn’t be a joke, would there?

The saying is available on navy blue t-shirts for men, women, and kids, as well as being available on a hoodie, too.

The Doctor Who Knock Knock! Who’s There? The Doctor T-Shirt is available for $19.95 at SnorgTees.

You keep on knocking but you can’t come in. That seems to be the message on the Doctor Who Knock Knock T-Shirt. The Doctor himself has declared “the assembled hordes of Genghis Khan couldn’t get through that door,” but what about a horde made up […]

If you’ve ever wanted to take the TARDIS for a spin, you’ll be excited to know the Doctor Who Spin Doctor TARDIS Pendant will finally give you the opportunity. Designed by the master of geek jewelry at Paul Michael Design, who has created goodies like […]