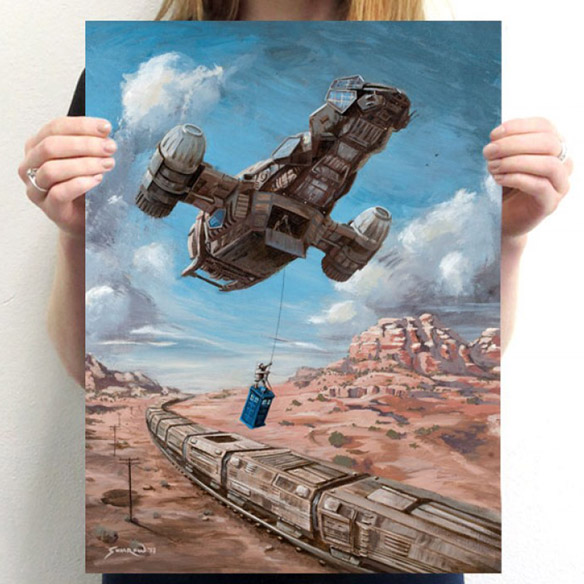 Browncoats and Whovians have a reason to cheer as Captain Mal and the Doctor team-up for an epic train robbery on the Doctor Who Firefly ‘The Time Job’ Poster.

Malcom Reynolds and the crew of Serenity have no problem with being bad guys and the Doctor doesn’t let a little thing like being a Time Lord stop him from stepping outside the law every now and then. Heck, he’s robbed a bank before so liberating a hi-tech train of its cargo isn’t a big deal. On the bright side, it’s probably safe to assume that this theft will benefit humanity in some way, although Mal probably won’t mind if he also ends up with a little extra cash in his pocket.

The Doctor Who Firefly ‘The Time Job’ Poster is available for $11.00 at TeeFury.

Did you miss the official 10th anniversary of Firefly on September 10? Yeah, me too. Fortunately, the Firefly 10th Anniversary Poster will let you redeem your Browncoat status while also providing a great piece of wall-art. As an extra-added bonus, you even get the heart-tugging […]

Firefly / Serenity remain very popular, even after all these years. Part of the draw is undoubtedly the sexy stars of the series: Summer Glau, Gina Torres, Morena Baccarin, and Jewel Staite. Now with the Firefly Les Femmes Poster Set, you get a set of […]

Firefly “I Want to Believe” Poster

This Firefly “I Want to Believe” Poster is not Fox Muldur’s old poster, but a mashup of X-Files and Firefly iconography together in one poster. It is printed on 100-pound, satin-finish paper and measures 27″ x 40″. This is going to look good in your […]