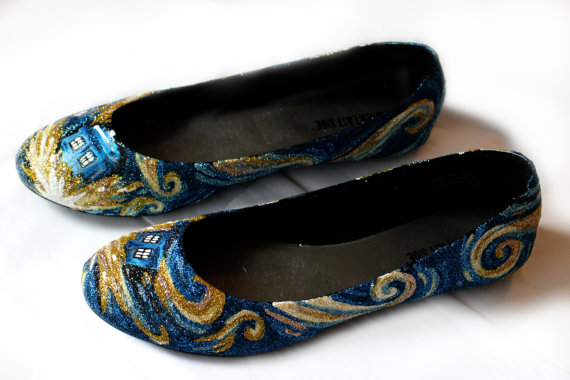 The Doctor doesn’t do hugs, and he’s probably not a fan of glitter, either, but that doesn’t have to stop you from wearing these Doctor Who EXPLODING TARDIS Glitter Shoes.

The iconic ‘Exploding TARDIS’ scene, as first imagined by Van Gogh, is captured in glitter on these hand-painted and hand-glittered ballet flats, and several layers of clear polyurethane resin keep the glitter from wearing off. However, the creator of the Whovian footwear does mention that these are ‘special occasion’ shoes.

The Doctor Who EXPLODING TARDIS Glitter Shoes are available for $200 at aishavoya’s Etsy store.

Relive all of the excitement of the Vincent Van Gogh Doctor Who episode with this Doctor Who Van Gogh Exploding TARDIS Hinge Wallet. The TARDIS may be exploding, but your wallet never will. So don’t worry. This fun wallet features a colorful image of the […]

This Doctor Who Exploding TARDIS Throw will keep you cold on a starry night, with a print from Van Gogh himself. It’s warm and cozy and looks amazing. It makes a perfect gift for any fan of Doctor Who. This throw is made of 100% […]