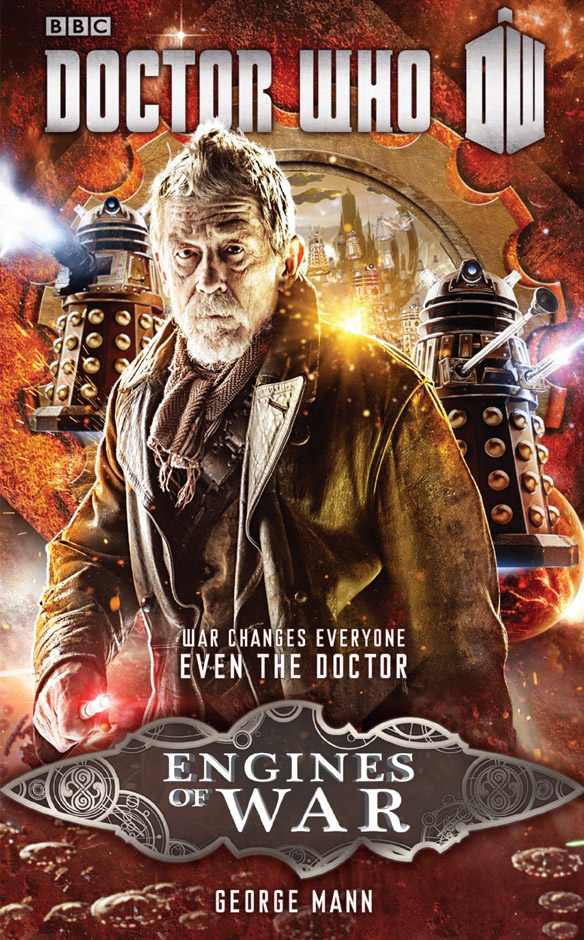 The War Doctor lives and he lives up to his name in the Doctor Who: Engines of War Novel.

Like the Eighth Doctor before him, the War Doctor didn’t get a whole lot of time on television but (also like Peter McGann’s Doctor) his adventures continue in other formats.

What happened before the War Doctor decided to use The Moment to end the Time War? Well, he spent centuries living adventures like the one mentioned below.

“I’ve had many faces. Many lives. I don’t admit to all of them. There’s one life I’ve tried very hard to forget-the Doctor who fought in the Time War.”

The Great Time War has raged for centuries, ravaging the universe. The Daleks and the Time Lords deploy ever more dangerous weapons in desperate attempts at victory, but there is no end in sight.

On the outer rim of the Tantalus Eye, scores of human colony planets are now overrun by Dalek occupation forces. A weary, angry Doctor leads a flotilla of Battle TARDISes against the Dalek stronghold but in the midst of the carnage, the Doctor’s TARDIS crashes to a planet below: Moldox.

As the Doctor is trapped in an apocalyptic landscape, Dalek patrols roam amongst the wreckage, rounding up the remaining civilians. But why haven’t the Daleks simply killed the humans?

Searching for answers, the Doctor meets ‘Cinder’, a young Dalek hunter. Their struggles to discover the Dalek plan take them from the ruins of Moldox to the halls of Gallifrey and set in chain events that will change everything. And everyone.

Fans of John Hurt’s war-weary Time Lord can continue the adventure with the Doctor Who: Engines of War Novel, available as a paperback for $6.31 at Amazon. It’s also available for Kindle for $5.99.

If you want to make your Kindle look more like a traditional print book, try these Classic Novel Kindle Covers. They transform your digital device into a traditional book. At least on the outside. They give your kindle some retro personality and they just plain […]

Doctor Who fans who are looking for a good read will want to sit down with The Dalek Handbook. Inside you will find an in-depth look into the Daleks, the Doctor’s most fearsome foe. It is filled with pictures and info from six decades of […]