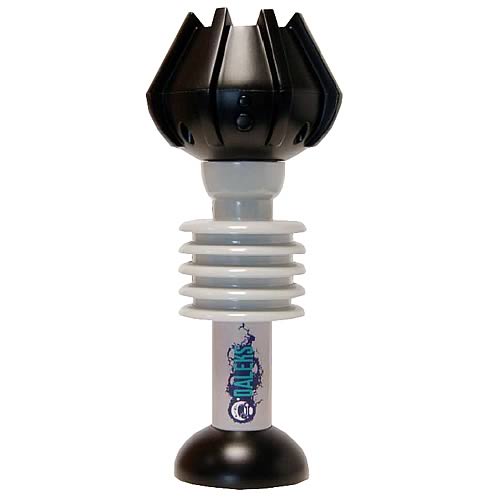 It’s good to have a flashlight handy since you never know when you might need one. It’s even better if the flashlight looks like an eye stalk that you just ripped off of a Dalek. This Doctor Who Dalek Eye Flashlight with Sound is the best flashlight ever for Doctor Who fans.

First, it’s a flashlight, which is cool, but it also plays sounds when it lights up. Now that’s a nice bonus. Especially since it plays sounds like: “You are the Doctor, you must beexterminated.” “You must be exterminated.” and “Scan reveals nothing.”

It’s as if you really took this trophy from a Dalek. This is almost too much fun for $24.99 from Entertainment Earth.

Just like R2-D2, the Dalek cyborg from Doctor Who have also has its fair share of moonlighting gigs, e.g. as an alarm clock, coasters and now as a keychain flashlight.

Daleks are usually a nuisance to have around, because they are large, will kill you and they keep shouting exterminate. However, this Doctor Who Dalek Flashlight Keychain will actually be pretty handy to have around at all times. This awesome 2.5 inch tall Doctor Who […]